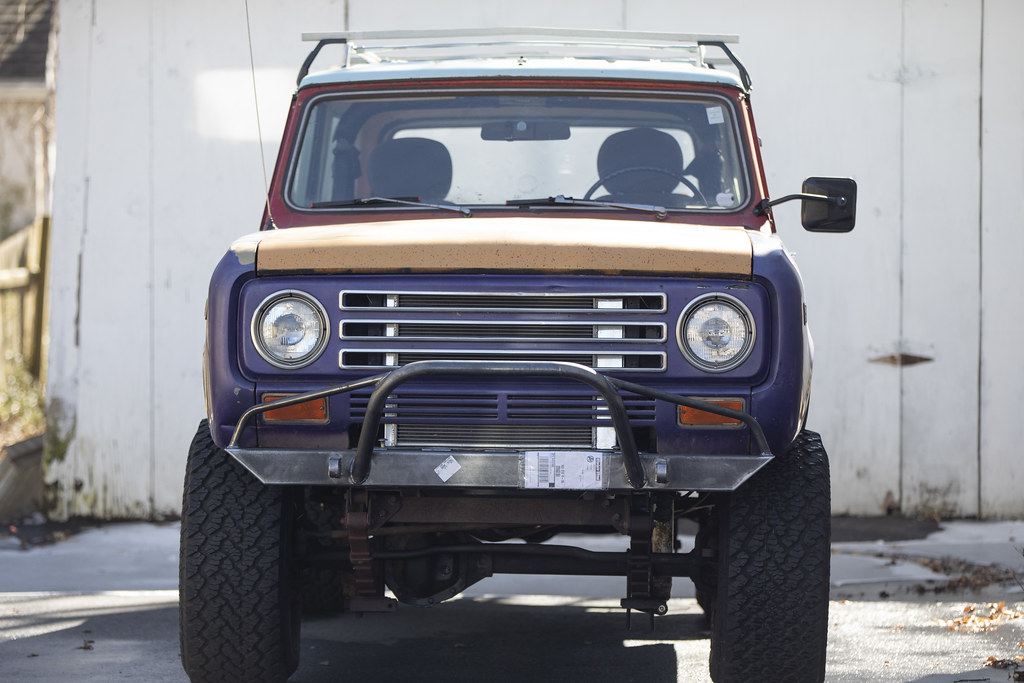 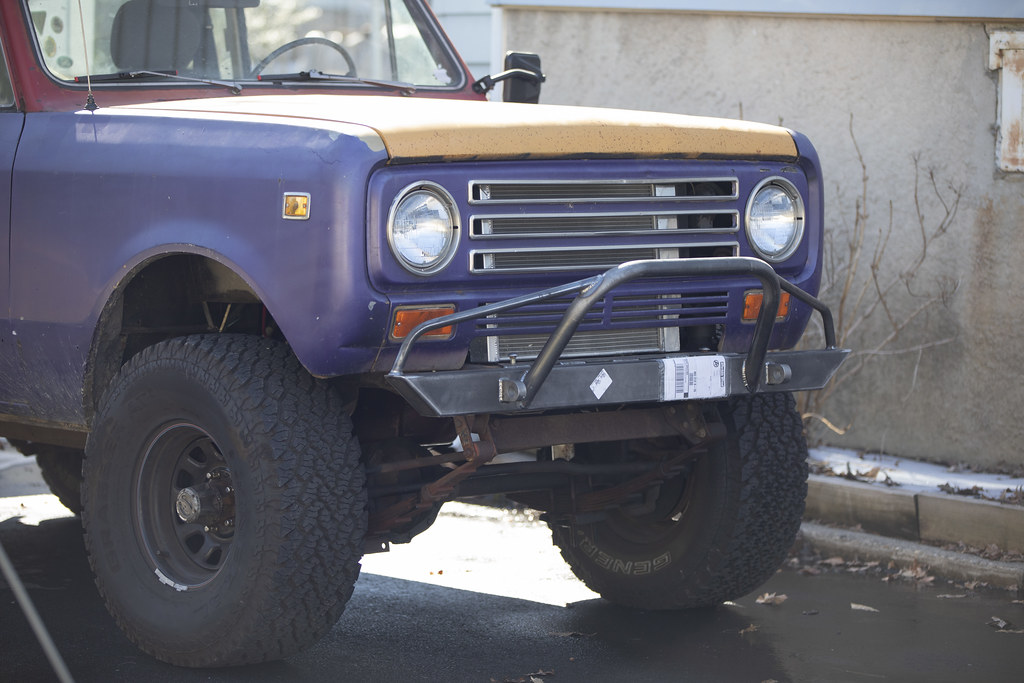 That was fast. This 45-lb. beauty showed up on my doorstep this afternoon, and being that it’s 60˚ outside, I had to go out, unbolt the stock bumper, and do a test fit. It looks fantastic, and the workmanship is excellent—better than I was expecting, actually. The clevis mounts aren’t flush-welded—they go all the way through to the back of the bumper through two holes and are welded on each side. The welds are clean and tidy. The bull bar doesn’t stick out too far, something I was afraid of.

It’s raw metal, so I have to pull it back off and bring it inside so it doesn’t flash rust. Then I can weld on some  lamp mounts, drill and tap license plate holes, clean it good, and spray it with some black paint.

The guy out in Flintstone with the ex-dealership Scout I pulled parts from still has his truck. During my first visit I was being chased by snow, cold weather, and the sun setting, so I wasn’t able to stay as long as I wanted to pull parts, and I spent too much time heating bolts to pull a hub I didn’t directly need. I’m planning a trip back out there to grab more stuff, because I could be spending winter quarantine time refurbishing parts inside when  I can’t be working outside.

I did a shitty job of remembering what to pull while I was there last time, so I’m making a list this time, in order of desirability:

So I’ll pack another rescue box, run out to Harbor Freight for an impact driver, buy another can of PBBlaster, and plan an early departure so that I can get as much sunlight as possible.

I went ahead and ordered a bumper! The way the ordering process went was a little strange; the contact from the Facebook page sent me an invoice via PayPal (keyed to the name of the fabricator) so I used my credit card to purchase it. This way I’ve got their built-in protection working for me. I got a notification from UPS that it was shipping yesterday(!!!) but then the contact messaged me on Facebook the same day asking if it was for a Scout II or an 80/800. Later that evening UPS updated me and told me it wouldn’t be delivered tomorrow, which left me with equal parts sadness and relief. And there’s no update on shipping yet.

I’m already thinking ahead to modifications and how I’m going to weld a set of brackets on under the pushbar to mount a pair of fog lamps, as well as a pair of captive nuts to accept a license plate.

I was in on a long empty zoom call this morning where I was just listening, and noticed that I was getting a lot of spam comments on oldlinestatebinders.com. I’d set up the site back in October but never really worked on it since then. I logged in and set up Akismet, which will shut the spam right down, and updated all of the themes and plugins. While I was listening, I swapped the theme and replaced the stock photos with some stuff from previous events.

Clearly, I need to get some more T-shirt designs finished and get them posted.

I’ve seen a guy selling front bumpers on Facebook Marketplace for a couple of months now. They’re basic prerunner-style bumpers, with a large pusher bar, two clevis mounts, and upturned edges, much like the bumper Brian and I built. They’re built from 3″x 4″x 1/8″ box steel, while my rear bumper is 2″ x 6″.

(through the magic of Photoshop, I can simulate the look)

But the thing that caught my eye first was the price: $280 including shipping.

I did a quick google search and found the company website where they’re selling the same thing for $15 more without shipping, and so this sounded like an even better bargain. I’ve got a little less than this amount left in the Scout kitty, but I just sold a spare camera lens a few weeks ago, so I think I might pull the trigger on this.

As much as I love the ’72 grille I’ve got, and the overall look of the front my truck, there’s always been something missing. This would be a good start, and would be easily modified for a winch or fog lights.

I can’t do much with the Scout in the shitty weather we’ve been having lately, so I’m trying to find some small things I can accomplish in short amounts of time. One of the things I’m planning for the spring is sanding and prepping my spare sheet metal, and one of the primary pieces Iive had my eye on is the white front fender from the Wheaton Scout. That truck had been used for plowing so there was a fair bit of sheet metal damage to the rear, but the main section of the driver’s fender was clean. I’ve been soaking the bolts holding the splashguard in PBBlaster for several weeks, and pulled it into the basement this afternoon to see if I could get the rest of the rusty sheet metal off.

One of the bolts came off easily, but I had to heat the rest of them with a propane torch and use a vice-grip on the retaining clip to get the rest of them them to budge. Still, anytime a bolt comes off without the sawzall is a good day in my book. I also  got the chrome strip off cleanly and scraped out the mud and gunk from the inside, and then hung it back up in the garage.

When the weather warms up, I’m going to hit it with the powerwasher to clean the metal off, then glass bead blast the rusty parts. There’s a set of dents in the front that need to be coaxed back out, and then the whole thing will be ready for a light skim of bondo, sanding and priming. The goal is to get this piece ready for final coat and then put away.

Meanwhile, I’ve got a feeler out with a local guy about a heater core from his parts truck. I messaged him about it, fully expecting to set a date to drive out and yank it myself, but he wrote back and told me he’d let me know when he’d pulled it.  I wrote back and asked him what he wanted for it, and then offered to drive out and pull it myself. Then he went dark. I’ve never had someone offer to pull something sight unseen, especially not on a Scout. I don’t want a rusty pile of shit, nor will I pay for one, so I’m curious to see if I ever hear back from him. Either way, I’d love to have a heater box I can disassemble and refurbish while it’s cold outside—I’d like a small project to tackle on the workbench.

The verdict: it’s perfect. Both Finn’s bike and mine fit with no fuss at all (I was worried about my top bar being a bad fit).

It’s time for the annual List Of Things I Really Hope I Can Get To for the year of 2021. Looking back on last year’s list, I was able to get a bunch of things done—and do some others that weren’t even on the radar. The engine got degreased—I wound up buying a pressure washer, which made things much easier. I swapped in a new starter, fixed the speaker cable, and sandblasted a bunch of spare sheet metal to get the rust neutralized. Beyond that, we started work on lockable storage, I fixed both front shocks, and replaced all of the bulbs in the dash with what turned out to be bluish LEDs. So what’s in the future for 2021? Let’s review:

A few weeks ago, during a weekly Craigslist/Marketplace survey, I spied a chewed up a dogdish International hubcap in the foreground of a photo. I reached out to the seller to see what the rest of them looked like. He sent me back some pictures, which revealed the condition I was expecting: well-used but still mostly intact.

This design normally comes in two pairs—two solid and two with a hole in the center, but someone widened the donut pair roughly to fit over locking hubs. Those are pretty much garbage.  The solid ones are dented but might shine up nice, and for the price I offered they were a bargain; I paid more in shipping than I did for the whole set. I washed them in the work sink and used a rubber-covered wrench to pop most of the large dents out of the two solid ones. I bought them to display, but I can always pick up some inexpensive clock kits and make something useful out of them too.

I have a little notebook in the console of the Scout where I record the mileage every time I put gas in the tank. I started doing this back in 2014 when I wanted to figure out the MPG, and it’s been super valuable to sort out all kinds of other things beyond quantifying how thirsty Peer Pressure is. I took her out today for a quick run to the grocery store before the snow flies this coming week. When I came back inside I brought the book in and plugged the numbers into an Excel spreadsheet. The graph it produced was a little surprising.

The dip during 2017 makes sense, as I was out of commission from September of that year until about March of 2018 with chemo, surgery, and recovery. I took her 275 miles to the Eastern Shore and back for a camping trip in 2018. Later that year we drove out to Nationals, which accounted for roughly 1,000 miles, and in 2019 we went back. In 2020 I was home every day and thus drove the Scout everywhere. I think I put about 20 miles on the Honda last year. I wonder why I only drove the truck 243 miles in 2016?

I also updated the spreadsheet where I capture costs—for everything like parts, repairs, and incidentals minus gas, and the average cost per year is at $436. I do actually capture gas costs in the mileage book, and maybe if I’m motivated this week I’ll go back out, get the book, and plug that into the spreadsheet.

Meanwhile, there’s a local guy with two trucks on Craigslist, one whole package and one for parts. I inquired about the fender flares on the parts truck but he said he was keeping those. I told him I’d be interested in coming out to see what’s left after the snow melts—I’m still interested in a spare set of locking hubs to put on the shelf, as well as a heater core I can refurbish on the workbench while the snow flies outside. 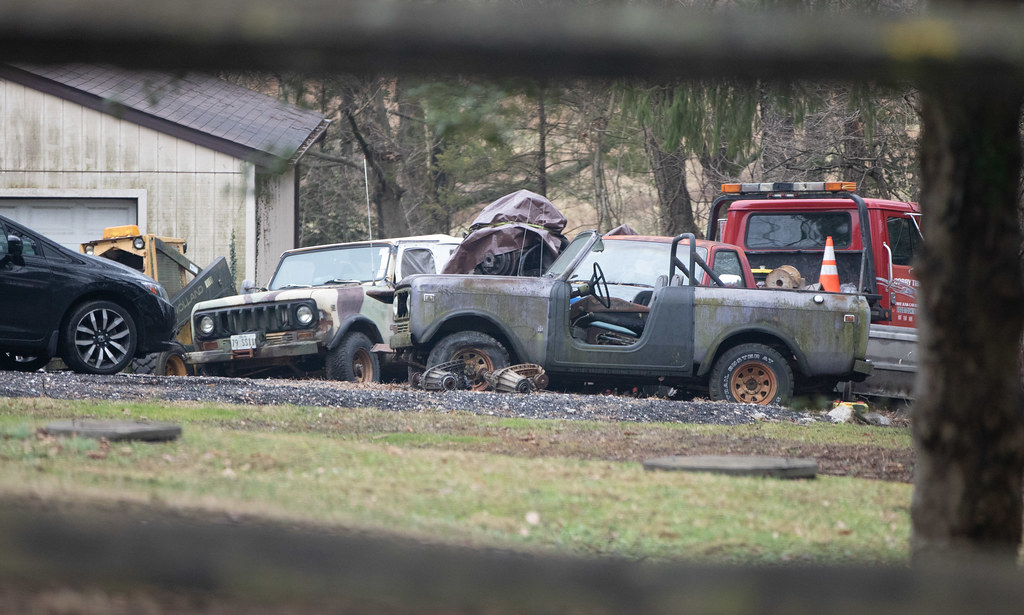 Driving through the County after a hike with the family yesterday, I spied these two beauties parked in the back of a lot about twenty minutes from the house. Perhaps I’ll stop by in the summertime when I’m driving Peer Pressure and see if the owner is home.