Two years ago, I designed a shirt using the face of the transfer case shift knob, and thought about printing some T-shirts to sell. I had a test print made and wore it to Nationals last year. A Scout vendor who attended the same show released a version of that shirt on their Instagram feed this spring. I’d also designed a series showing the grille faces from all iterations of the Scout II and set it aside because…life; they released a similar T-shirt design this summer.

For some reason, this really got to me. I should be making some money on my ideas. Several things were holding me back: I didn’t have anyplace to host the designs (I didn’t want them on my personal sites), I’m wary of the copyright issues around the IH trademark, and I didn’t want to be seen as a copycat. But it stuck in my craw.

The other night I saw a post by another Scout owner in Austin selling her own T-shirt designs and decided I just needed to pull the trigger: if they can do it so can I, and I figure my designs will look better. I bought the domain Oldlinestatebinders.com for $7 and I’ll be using that for a website and an Instagram feed, and I’ll use one of the T-shirt fulfillment vendors online for a while and see how things go. So far I’ve got the 4-wheel drive design, the T-19 shift pattern, the Oldlinestatebinders logo, and a series of grille designs almost ready to go. I figure some careful social media work might generate a little extra cash.

My personal preference is for either the base-level model with 2.3 liter engine and 6-speed manual (the only way I’d buy one of these, frankly, is with a manual) or the next model up (the “Big Bend”). Optional packages would give us some features we’ve never had in a vehicle: two-door lock and unlock functionality, 110V/150W AC power outlet, ambient footwell lighting, dual-zone electronic automatic temperature control, and heated front seats, among others.

In other Bronco-related news, Hemmings just ran an article about Ford’s attempt to redesign the Bronco in early 1971, and it’s fascinating to look at the pictures of what could have been and where they were looking for inspiration. They started with something that looked great to begin with and generated some of the ugliest redesigns I’ve ever seen. Nothing about the new concepts feels balanced, looks attractive, or works with any of their design cues from that era; the initial sketches have some of the DNA of the full-size trucks but as they looked at the competition (there’s a Scout poster in one of the photos, and later clay models are posed outside with a Range Rover and a Scout in the background) they smoothed the edges until it became a bland stick of butter. The grille treatments alone make me want to barf. They couldn’t figure out how to finish anything behind the A pillar—all of the tailgates look like dogshit—and the side profile looks smaller and more station-wagony as they go. I was always a fan of the 2nd gen Bronco (using the cab of the full-size pickups) so they eventually landed on their feet, but this is a horrifying could-have-been.

So Tesla unveiled their Cybertruck last night, to the resounding shock of, well, pretty much everybody. While the specs sound fantastic (more towing capacity than a F150, better ground clearance, etc.) the whole thing is wrapped up in a body that looks like lousy origami or a first-year automotive design student’s initial study. When compared to the graceful curves of the Model S or 3, this looks unfinished. And there are practical considerations ignored that look like they never studied how real people use real trucks: that tailgate will be rendered useless after one trip to the Home Depot.

And what a terrible fucking name.

Here are some crappy cellphone shots of my kick panels. The driver’s side was patched crudely before I got the truck, but the passenger’s side has always been swiss cheesy. I think I’ll wait for warm weather, take the angle grinder to both sides, and hit them with some rust encapsulator. One of my goals for this year is to get a decent welding rig and start practicing again so that I can take some smaller repair projects on; this would be a good one.

Passenger’s side. Interesting to see the original gold paint there, isn’t it?

In other news, a printing vendor I use at work had a special on circle-cut stickers last week. I’ve been noodling with a design for our ad-hoc Maryland IH group, called Old Line State Binders, but I was having a hard time nailing down a design incorporating the Maryland flag. It’s a great flag but very visually busy, and in the last year there’s been a glut of shape-plus-flag stickers out there: a crab, deer, dogs, mustaches, etc.

My original idea was to use something ubiquitous to vintage 4-wheel-drive trucks: the locking hub. That part was pretty easy to nail down, and I took away some of the visual clutter to clean up the image. Integrating the flag and the name was the hard part. In order to keep the design circular (and get my cheap stickers before the deal expired), I left out the name and went with the following design:

Eventually I’ll figure out how the rest of the design should look. If you’d like a couple, drop me a line and I’ll send you one when I get them.

I’ve been really quiet on the Scout front for the last year or so due to work and family commitments. I haven’t visited the Binder Planet in ages. I’m hoping to get some time in the spring to organize a meeting and get back in touch with people.

A nice fella on the Binder Planet had these stickers made up and offered them to the community. They were too groovy to pass up. 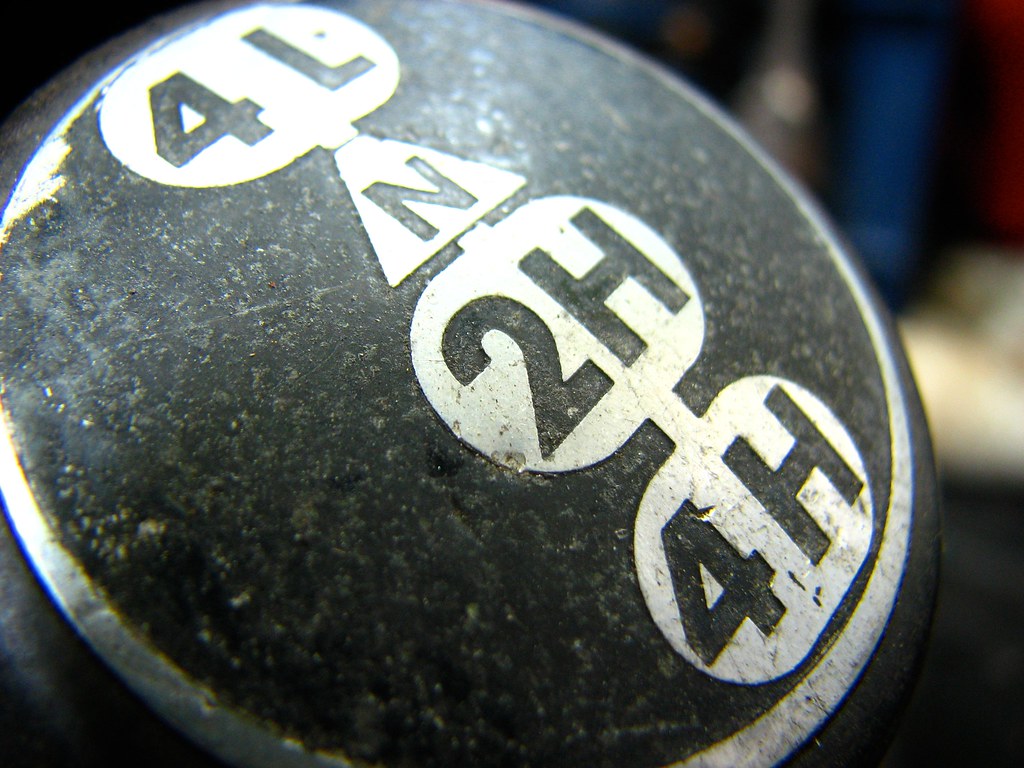 From The Truth About Cars, a great article about the VW Harlequin (1996 Golf).

At its core, the Golf Harlequin was, quite simply, a multi-colored Volkswagen Golf manufactured only for the 1996 model year. But, like most things in the car world – and everything in the Volkswagen world – there’s a lot more to it than that. So this was the original plan, laid out sometime early last year:

And here’s the new plan, based on lots of mocking up and thinking and head-scratching and more than a little beer-drinking: