I See What You Did There

This nice-looking Traveler showed up on Craigslist and FB Marketplace for around $17K, which is a pretty good price for what they’re offering. What caught my eye, beyond the obvious good looks and desirable extra 18″ of wheelbase (and thus cargo space) was the location of the first staging shot:

That’s the former location of East Coast Scouts, my local IH mechanic in the early days when I had Chewbacca. He closed up shop in the early 2000’s when it got to be too much to stay on top of; he’s back in the area after moving to PA for a while and I traded emails with him last year. 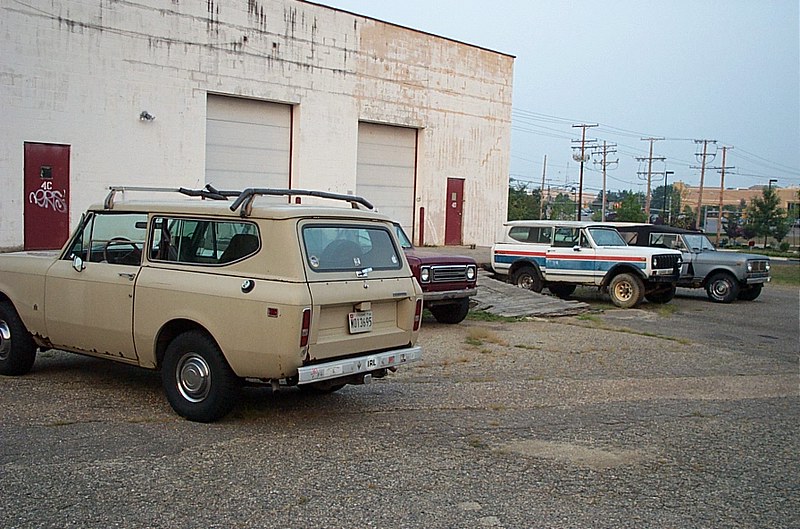 Hemmings on the SSV

Hemmings has a good writeup on the Scout SSV, which was to be International’s successor to the Scout II. From what it sounds like, they were aiming for the fences at a time when they could only afford to polish what they had.

Light trucks, on the other hand, were becoming more of a bother to the company. It discontinued its Travelalls and pickups in 1975 in response to the 1973 oil crisis, had trouble meeting the Environmental Protection Agency’s fuel economy standards set to take effect in 1979, and faced a second oil crisis that year.

I’ve always thought the SSV was a hideously ugly design that looked more like a Tonka truck than a production vehicle; even if they’d been able to pull this out of their hat, I wonder how many of them they would have sold—it reminds me of AMC’s attempts to shake things up with the Pacer, and later the Matador. And we all know how that went.

There’s a presentation at the ACD Museum in Fort Wayne about this subject on Saturday, which I’d love to be able to listen in on—but it doesn’t look like they’ve accounted for, uh, COVID. It’s a shame, because I’d definitely log in to a ZOOM call if I could.

I got the Line Set Ticket from the frame serial back from Super Scouts this morning, and, well, the mystery continues. Here’s what I know so far:

Knowing that, I have to go out and see if I can read the engine serial to see if it matches what’s on the LST (311593) for confirmation.

As is common with most Scouts of its age, it’s a jigsaw puzzle from many different trucks. Maybe someone out west put it together and then shipped it east to sell? 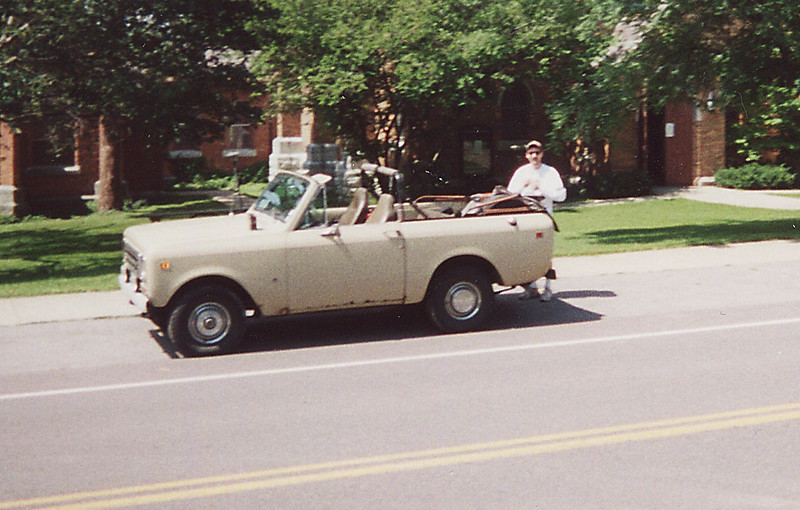 Digging through the family archives this weekend, I found a couple of shots of Chewbacca and I in her prime. This was from about 2001 or so, out in front of my parents’ place in New York State. I guess I’m used to looking at a taller suspension these days, but she’s riding awful low on the springs.

Well, shit. It just occurred to me that I’ve had this Scout for 10 years. That’s longer than I had my first one. 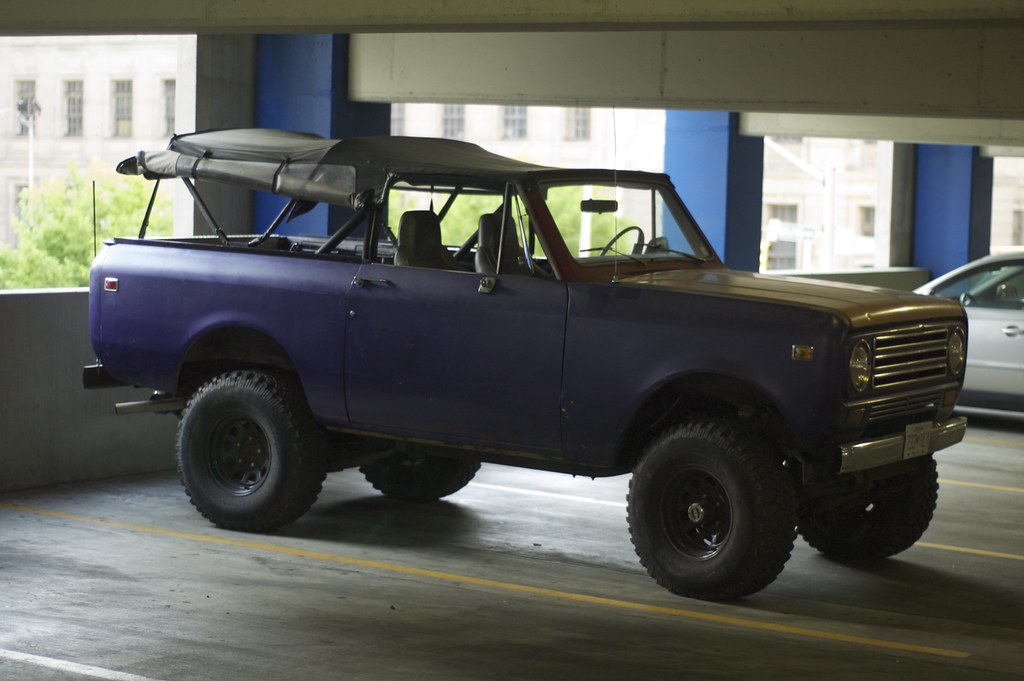 In between Scouts, nine years ago, I went up to White Marsh to look over a Scout on Craigslist. What I found was a rough example with a lot of rust, bondo, and primer. It was a non-runner, up on a trailer, and the victim of questionable aftermarket mods, the best of which was a chain steering wheel and skull shifter knob. I snapped a picture and left. 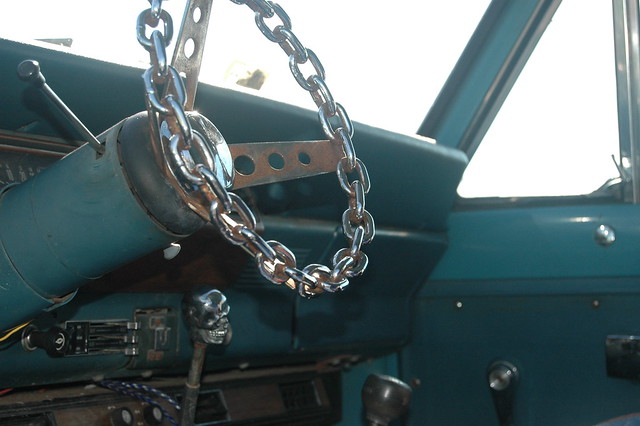 Imagine my surprise when a Scout showed up on Craigslist this week with the same shift knob. A little comparison shows it’s the same Scout with a new steering wheel. The rest of it looks exactly the same: rust, bondo and primer.

I ordered a lineset ticket for the VIN on Peer Pressure a month ago or so, and it came in this afternoon. I always figured the plate was not original to the body, because it’s screwed in with sheet metal screws, but I was never really sure. From what it says, the original shell was built on August 18, 1975, in Kansas City for Bob Post Chrysler Plymouth in Aurora, Colorado. It was painted Solar Yellow, Code 4410 (a 1976 color), and it had a 304 V-8 with an automatic transmission.

My body shell was originally painted Gold Poly, a 1975 color, and as mentioned before, is not original to the frame. This basically just confirms it. My only shot at identifying it now is finding the VIN chalked on the body somewhere.

One day in 2000 when I was at work, one of the local news teams came to my leafy, paved street (the only one in our neighborhood), blocked off traffic, and shot a promo in front of my house. The blurry shape in the upper left corner is Chewbacca, who had her 15 seconds of fame throughout Baltimore. Parked in front of her is my neighbor Bertha’s 1973 Dodge Dart. Mixed among the crowd are my neighbors and some paid stand-ins. This blurry 251x189px video is a video capture I took of a VHS recording from TV; the VHS tape is long gone and I doubt I’d ever be able to find a copy online anywhere.

I just found out via text that Brian had a catastrophic fire which leveled his garage today, enveloping part of the house. Brian and his family are OK, but Chewbacca, which was sitting in the bay of the garage, is likely destroyed. The pictures he texted me show a pile of charred timbers sitting on the shell. I can’t believe it. It’s a shit end for a reliable, faithful truck that I was sure would outlast Peer Pressure.

For anyone following along, Chewbacca was my first Scout, and I secretly sold it to Brian’s wife as a Christmas present for him. He spent a year restoring the whole thing, using a Kentrol tub and new parts wherever possible, and the result was a work of art. Some might say it was a different truck entirely, quoting Theseus’ Paradox, but I always knew her beating heart was the same. The Scout that Wasn’t

I know International Harvester was toying with a new design for the Scout in the late ’70s, and the pictures I’ve seen of it turned my stomach in disgust. Today I stumbled upon this article, which contained pictures of a prototype I’d never seen before:

Not as ugly as the SSV, but about as bland as a cheese sandwich. Still, if I squint, I can see the Scout II windshield; it looks like they stuck an Astro van nose on the front and just sketched in the rest. And they took the Hoffmeister kink out of the rear window.