As mentioned elsewhere, Finn and I put about 70 miles on the Scout this weekend looking for a Christmas bike. Pulling in to the first bike store we were met by the saleslady who asked me if I’d like to trade the Scout for a bike before I could even say hello. Laughing, I told her I was going to have to turn her offer down. At the third bike store, the salesman told us he loved the way it looks and asked how well it ran.

I told him the truth; she’s running great and seems to bring good vibes wherever she goes. 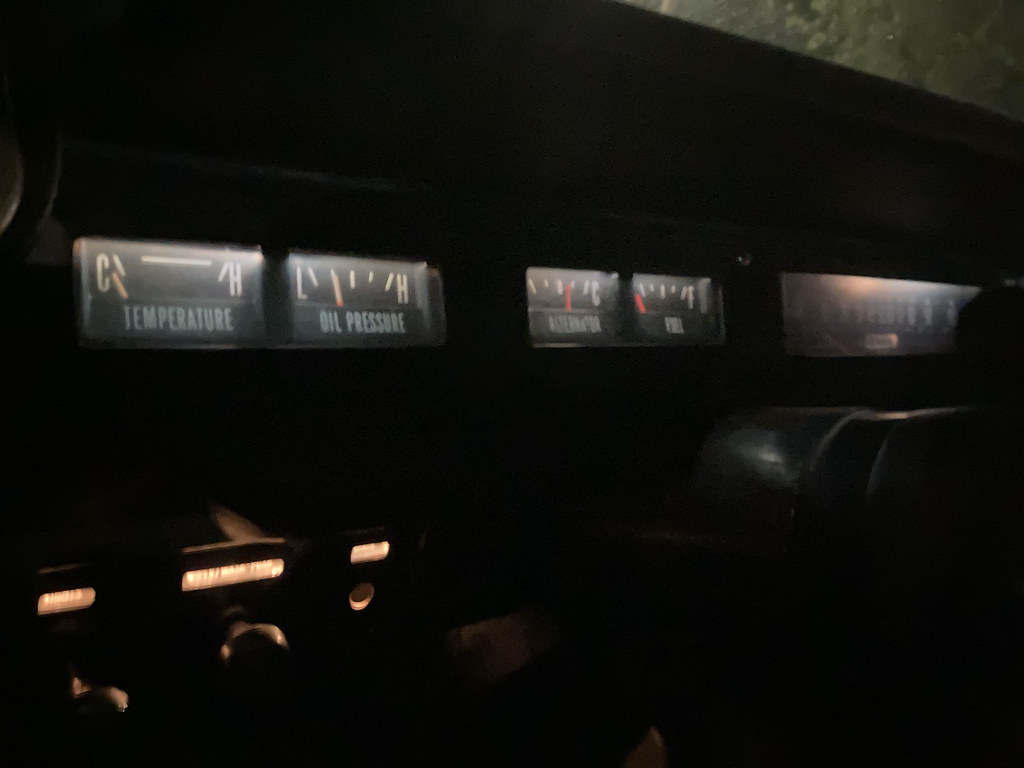 I went to put the Scout back in the garage the other night after dark, and when I hit the running lights I was greeted with the lovely sight of all of the dash lights glowing brightly in front of me. There’s about a one in four chance of this happening at any given time, so this was a nice surprise.

My personal preference is for either the base-level model with 2.3 liter engine and 6-speed manual (the only way I’d buy one of these, frankly, is with a manual) or the next model up (the “Big Bend”). Optional packages would give us some features we’ve never had in a vehicle: two-door lock and unlock functionality, 110V/150W AC power outlet, ambient footwell lighting, dual-zone electronic automatic temperature control, and heated front seats, among others.

In other Bronco-related news, Hemmings just ran an article about Ford’s attempt to redesign the Bronco in early 1971, and it’s fascinating to look at the pictures of what could have been and where they were looking for inspiration. They started with something that looked great to begin with and generated some of the ugliest redesigns I’ve ever seen. Nothing about the new concepts feels balanced, looks attractive, or works with any of their design cues from that era; the initial sketches have some of the DNA of the full-size trucks but as they looked at the competition (there’s a Scout poster in one of the photos, and later clay models are posed outside with a Range Rover and a Scout in the background) they smoothed the edges until it became a bland stick of butter. The grille treatments alone make me want to barf. They couldn’t figure out how to finish anything behind the A pillar—all of the tailgates look like dogshit—and the side profile looks smaller and more station-wagony as they go. I was always a fan of the 2nd gen Bronco (using the cab of the full-size pickups) so they eventually landed on their feet, but this is a horrifying could-have-been.

Look At What’s Left of This

This old warhorse showed up on Craigslist this afternoon; $1500 for some rust held together with what looks like Glacier Blue paint. 4cyl/manual. It’s being sold by a dealer, so it’s more than likely they drug it out of a field somewhere and are advertising it to get some of those sweet sweet Icon dollars.

I would give them maybe $300 for this as it sits; I doubt anyone wants a blue interior, unless it’s got a tilt wheel. The engine is worthless but the transmission and running gear are valuable. And maybe the hubcaps.

I ran a bunch of errands in the Scout this weekend, taking advantage of the lovely 70˚ weather, and toward the end of Saturday I decided to pull the top off with Finn’s help. As with years past, it’s been getting easier and easier to pull off with practice, and we had the whole thing removed in a half an hour. The part that takes the most time is winching it up into the rafters, but even that went quicker than last year. The soft top is now in place, and Jen and I enjoyed a breezy drive out to the Home Depot on Sunday—life is good!

While at the HD I sourced a 8/32 hex head bolt and brought it home to fit into a spare rearview mirror. The one that Peer Pressure came with (bottom) is somewhat narrow and is beginning to delaminate at the top and the bottom, so I thought I’d replace it with a larger, cleaner one (top). The only drawback is that the replacement doesn’t have a daytime/nighttime refractor tab at the bottom—but I do about 2% of my Scout driving at night, so it really doesn’t matter much anyway.

We’ve made it through over a month of quarantine, and having been stuck in the house this long, I’m thinking more and more about driving and road trips and being outside in the sunshine behind the wheel of a wheezy rattling old truck. We originally had plans to drive out to the Harvester Homecoming this year, but given the current state of the virus, I wonder if that’s going to happen. Which sucks because I was really looking forward to the adventure.

With the eventual resumption of long road trips in mind, I’ve been thinking about locking security on the Scout. I’d like something larger and more spacious than the Tuffy, and something I could ideally put in and remove at will. Since the days when I was parking my Mazda pickup in Baltimore City, I’ve thought of a locking box of some kind with an open slot in the bottom that would accept a round loop welded to the bed of the truck. The loop would extend up into the box and lock in place with a padlock or some other device, and thus be attached to the truck from the inside. I’ve looked at mass-produced boxes for a while, but the majority of them are custom made for Jeeps and thus are engineered for specific uses and locations, like mounting under seats or across the back bed. Tuffy makes several standard boxes for basic applications, but they look either too small or too big for what I want to do.

The second problem is where to put it. There are specialty boxes made for Scouts that mount in the bed wall behind the rear wheel arch on the passenger side, but that’s where I’ve currently got my Rotopax, and until I get the fuel sender sorted out and the rear bumper rebuilt, my spare gas can isn’t going anywhere. The spare goes on the driver’s side most days, and especially on road trips. The next best logical solution would be directly behind the rear seat on the driver’s side, and it would ideally be large enough that I could stack something on top of it to use the space wisely. Something 12″H x 2″W x 2″D would be a good start: tall enough to hold a backpack, wide and deep enough to put other bins or boxes on top of. I normally keep basic stuff like engine oil, coolant, jumper cables and small parts in a milk crate in the back, but for longer trips with the top down I’d like to have someplace to secure a full toolset.

I’ve also been thinking about how to organize all of the tools, parts and recovery gear in some kind of bag or container so they’re easily carried and padded from vibration. The roll-up tool pouch I’ve got is great but there are a bunch of other things rattling around the bottom of the Tuffy, like a spare coil, distributor cap, ignition wires, plugs, and filters. I suppose the first order of business is to collect the recovery gear contents and then figure out how big a bag I need. Then I have to track down a locking box in the size and shape I want, and modify it to my needs.

I saw this Scout on Instagram a week ago, and I really like the look of it. The indoor lighting is a little funky, but I dig the combination of a dark green paint job, traditional 1972 grille (with a silver surround), a white travel top, and blacked out steelies with narrow tires. This is a really traditional look, which is something I’d like to get Peer Pressure back to someday. 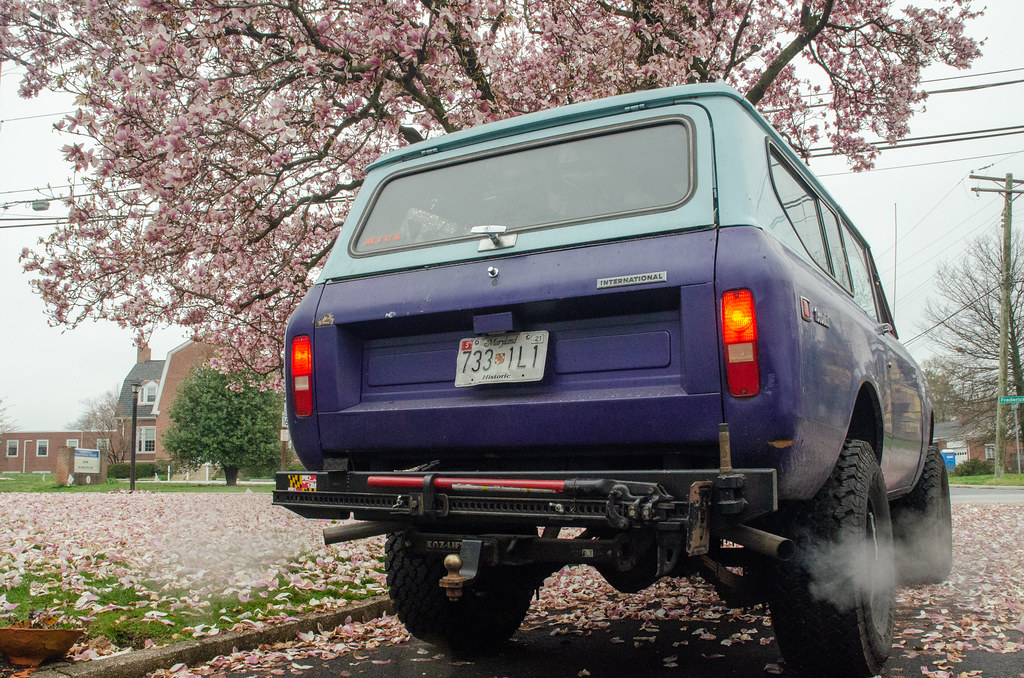 I saw a post on Instagram a couple of days ago featuring a mint-colored Scout with an interesting roll bar setup. In the comments, the poster mentioned he’d used a Jeep TJ rollbar as a base, cut it down, fabbed his own mounting plates, and made it all work. I commented that I would love to see more pictures of his setup, and it turns out he’s actually on the Binder Planet in a thread I’ve looked at before. He bought the whole cage two years ago for $100 and had the whole thing mocked up a month later.

What I like about it is that it’s a square cage that surrounds the passenger area—the rear of the cage fits over the rear seat so there’s more protection, and the whole thing has built-in shoulder belts. I like the look of it, and I love the fact that there are a ton of aftermarket products for the TJ bars—padding, speaker bars, new belts, and lights.

Our local junkyard has a Wrangler in stock every once in a while, and “large rollbars” are listed at $100. 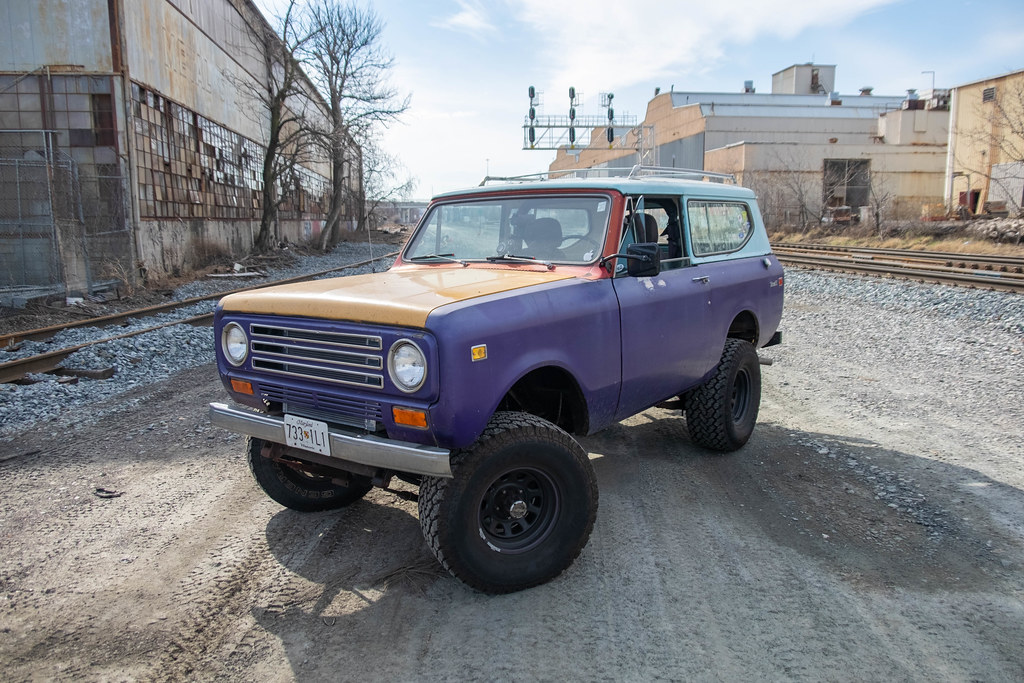