I had a couple of days over the holiday weekend to do not much of anything and decided to get out of the house and get my hands dirty. The first thing I wanted to tackle was the inner fender and windshield frame I’d sanded a couple of weeks ago, which were sitting in my not-so-dry garage waiting to be sealed up. I wire-brushed the surface rust off of the frame and covered the bare metal with Eastwood rust encapsulator.

Then I hit the inner fender with the brush and cleaned up some more of the bad rust. It too got sealed, and overall it doesn’t look too bad. When it was dry I hauled it back up into the attic to stay out of the way.

Then I pulled my old roof racks down from the rafters and disassembled both completely. One bar was bent from a mishap on the old Jeep so I straightened that out, and looked over the steel mounting clips. All four were covered in equal amounts of Siam Yellow, Chewbacca’s old color, and surface rust, so I wire-wheeled and hit them with some primer. After a trip to Lowe’s for new hardware, I painted the clips black and reassembled both bars. I’d forgotten that Chewbacca’s old top did not have a factory rack. These aftermarket bars are just low enough that they won’t clear the top of the OEM rack so I scooted them forward and backward to clear everything and tightened them all down. 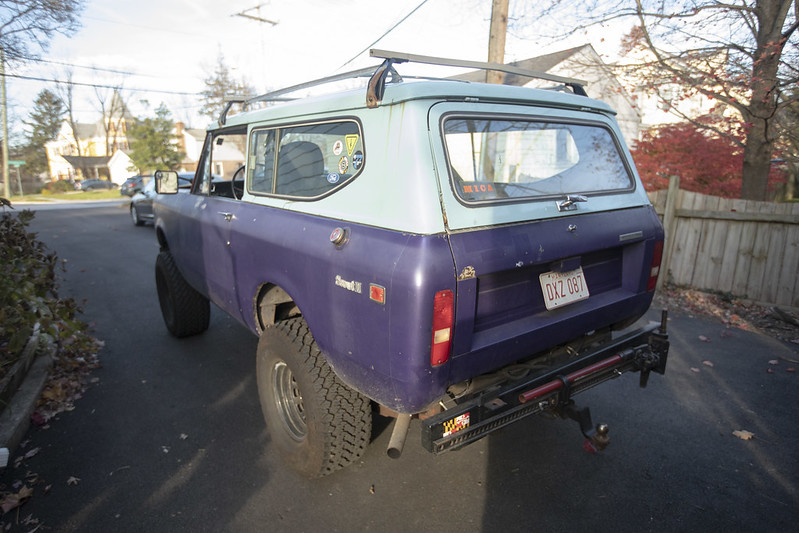 Looking through the Interwebs for local spare parts, I came across an ad for a guy building and selling bumpers up in Pennsylvania. He calls the outfit Affordable Offroad and he has a prerunner-style front bumper for $280 (additional options push the cost up to $320). Overall it doesn’t look too bad, and would be a good-looking upgrade to the front of Peer Pressure, which is a little bland.

The other thing I’m looking at is 16″ replacement wheels that are an inch wider in diameter than the current wheels—where the selection of narrower tires is wider. Summit carries a Coker 5×5.5 16″ steel rim, the look of which I like a lot, for a little over $100/each. There’s no reason to jump on this now, but it’s food for thought in the next five years.