Parts are getting harder and harder to find on the ground these days. Where 10 years ago someone might post a grotty truck and some boxes of parts on Craigslist for $500, these days Facebook Marketplace is where the stuff is, and there are more ads on Craigslist for people wanting to buy parts than sell. And the online vendors are getting more and more money for used stuff: A set of used door hinges are $150, for example—something that might have been $10 apiece in the bottom of a cardboard box a decade ago.

I don’t post on FB but I’ve kept my zombie account there, and I check the listings weekly for anything nearby. This past Wednesday a very roached-out truck appeared in Flintstone MD, just beyond that narrow spot in western Maryland where the state is the width of a parking lot. I reached out to the seller to ask about the doors, each of which feature a decal advertising the local International dealer, and when he agreed to $30 for each of them, I started making plans to go get them. He couldn’t meet during the weekend so I took a day off from work to drive out there.

My recovery kit held all the normal stuff—sockets, wrenches, hammer, drill, etc., but I also threw in a propane torch for heating bolts, heating handwarmer packs, a mini camp stove and some tea in case I was really cold, some Clif bars, and several tarps. I wore two layers of pants and three layers up top, knowing Western Maryland is usually 10Ëš colder than here. 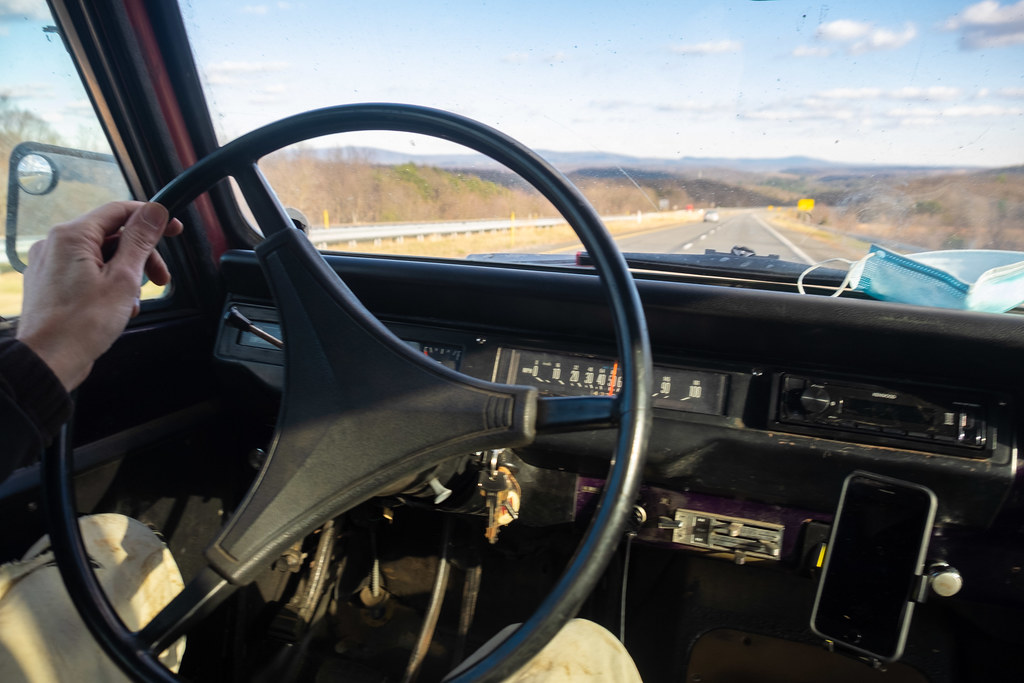 The drive out there was excellent; I was facing away from the sun, the sky was clear and blue, and the truck ran like a top. I made it to the house by 11 and pulled up behind the barn. The seller was actually listing everything for his (grandfather?) and actually left after he’d led me to the house, so I was there with Dave, the owner of the house and the Scout.

He was happy to hang out and help me pull parts, so I masked up, we put a breaker bar on the door bolts, and actually had them both off in about a half an hour. Looking over the rest of the rig, there wasn’t much to be harvested; the engine (a 196 4-cylinder) was covered in scaly rust, and my attempt to pull the heater box was unsuccessful. I had also wanted the front hubs, and bought good-quality snap ring pliers to remove them, but he wanted to keep them on the truck. I did wind up pulling a hub from a spare Dana 27 axle laying in the yard for Brian, whose Scout this will fit. It came off the axle easily except for one Allen bolt, which we had to heat and then cool to break free.

Dave was a super-nice fellow; we kept conversation mainly on trucks and our collective shock at how easily things were coming apart. In the land of pro-Trump yard signs there was mercifully no talk of politics. Dave has two other Scouts, a ’63 he uses for plowing, which looks well-loved, and a ’61 that he pulled apart to keep the ’63 going. They both have a lot of character to be sure. Our conversation drifted a little as we were wrapping up and he shared with me that his wife had passed several years ago and that he was working on cleaning the place up; it was obvious he was happy to have someone there to talk to, so we chatted for awhile about cancer and his motorcycles. 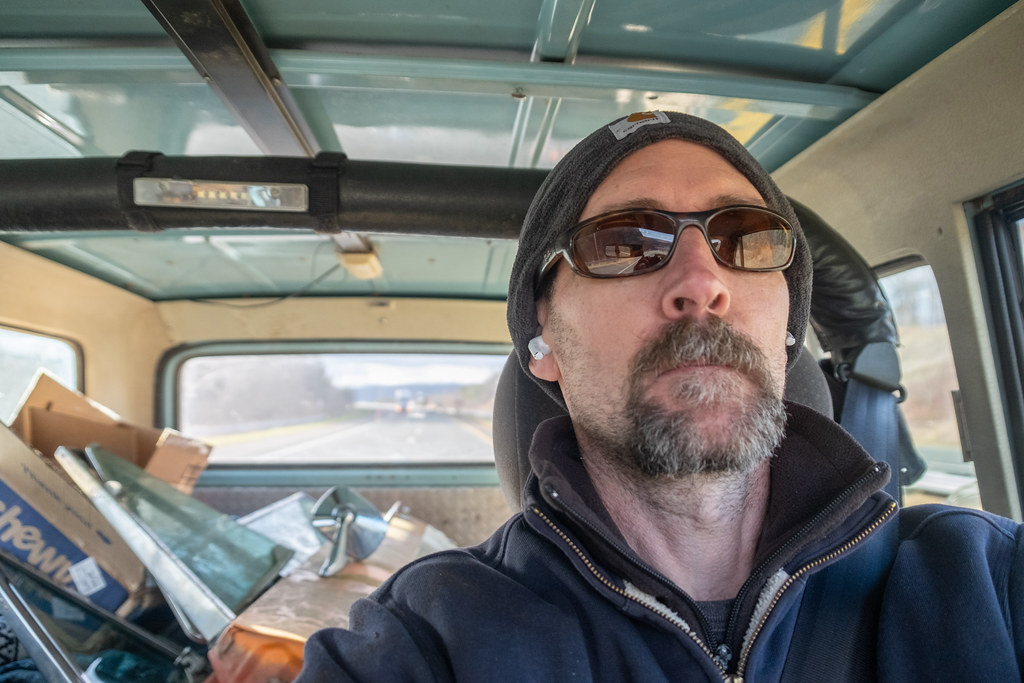 The only other thing I grabbed before leaving was the T-handle from the rear lift gate. We tried to get the mechanism out but it was rusted inside pretty well, so I gave up on that when I saw that it had begun snowing. After getting everything into the Scout I said my goodbyes and headed East. Traffic was light and I made it back home by 4:30 as the sun was just dipping behind the trees, which was fine by me.

So I’ve got two extra doors—this in addition to the two in the garage—but there are a wealth of good parts on each: the hinges are in excellent shape, the glass is good, the interior panels, armrests, handles and cranks are good, and the interior scissors both work. Plus, there’s an intact chrome strip on each one. I wasn’t able to budge the short chrome pieces on the front and rear fenders, but these pieces look real nice and should clean up well.

I’m kicking myself for not having pulled more while I was there (hindsight always being acute) but I enjoyed my day and I’m happy with what I was able to recover. If he’s still got it in the spring, I may head back out there for some smaller stuff—the tailgate latch assembly, the dome light, the hubs, maybe the steering wheel assembly, the gas evap elements, and some other hard-to-find parts.