I had a little time Saturday afternoon, in the 70Ëš weather, to look over the horn situation on Peer Pressure. The horns are located behind the driver’s headlight on the front side of the radiator support, so you have to pull the headlight to access it. What I didn’t realize is that there are actually two horns, wired in sequence.

You can see both of them in the shot above: The first one in line is mounted straight to the support, facing downward. The second is to the left, mounted on its side.Â Clearly, one of them isn’t working. I pulled the wire from the first horn to see which one was bad; the second horn fired just fine.

So, I cleaned up the wires on my Mercedes horns, grounded one lead to the body, and hooked the other one to the hot wire. Here’s the difference (Mercedes horns first, stock horn second): 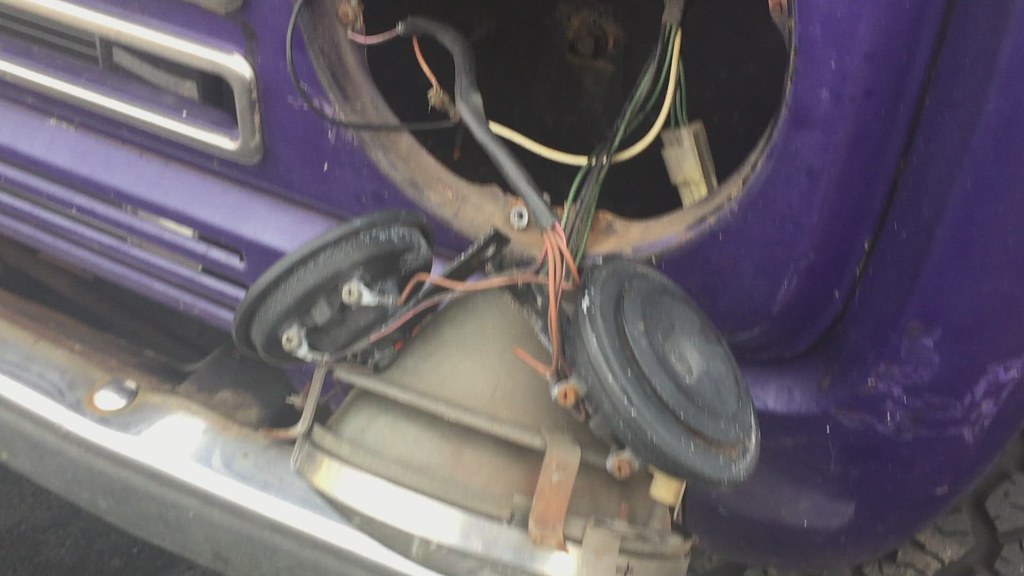 The stock horn is welded to the mount, so I can either cut it off and reuse it for the Mercedes horns, or fabricate a new mount. The stock horn is toast so I don’t see much use in keeping it.

But I don’t know if I like the tooty sound of the Mercedes horns either.

On Sunday I was back out in the beautiful weather, and went through some of my small parts bins to organize what’s out there; I’ve been squirreling stuff in there for years and I’ve lost sight of my inventory.

Most of the stuff in these three bins are smaller parts—going clockwise, I’ve got a lot of lights, light buckets, and mounts, as well as lenses. At 5 o’clock there’s one door scissor—I don’t know what side—and three wiper motors. At 7 o’clock there are two plastic defroster vents. Above that I’ve got a set of door hinges that weigh about a thousand pounds. To their right are a set of drum brake pads (they are now with their mates on the shelf). There’s a fuel pump at 9 o’clock, several wiper and door lock linkages above that, and two kick panel vents above that. In the center there are several tubs and envelopes of hardware, a spare washer bottle, and two door lock assemblies.

In some of the smaller tubs I’ve got a spare set of outer doorhandles, six window cranks, six inside door handles (four left and two right) and two pairs of wing window locks (the part that sits on the top of the triangle). There’s also a tub with wing-vent plugs—anyone with wing-vent windows knows what I’m talking about.

One of my next steps is to purchase a third parts organizer to split out the Scout-specific hardware I’ve got scattered among boxes and bags—the stuff that’s expensive to replace. Things like the allen bolts that secure the window crank to the door, the shallow locknuts that hold the door hardware in place, or the gigantic bolts that secure the door hinges to the chassis. Having all of that in one place would make life much easier.

I’m also going to have to add some new large bins for the oversized parts that are loose on the shelf.

One Response to Horns and Parts