Like the rest of America, I’ve been chained to my desk indoors all winter, waiting for warmer weather and the chance to get outside and pursue my hobbies in some semblance of normalcy. Being chair-bound for weeks has been bad for my health, both mental and physical. Jen says I’ve been cranky for a while. It’s taking longer and longer to leave work behind, even though it’s only steps from the living room. My neck has been bothering me for months, and my right shoulder and arm are aching each night as I store up stress—further irritated by clacking a mouse around a desk during endless Zoom calls.

Knowing the weather was going to be sunny and warm this week, I took a mental health Wednesday, loaded up the CR-V with recovery tools, and hit the road for Western Maryland. The Scout I pulled the doors from was still sitting up in the woods, and Dave, the owner, had reached out to see if I wanted anything else before it got hauled off to the crusher. I’d looked it over when I was out there the first time but had run out of warm daylight to really focus on stripping it and I knew there were a bunch of other things I wanted to grab.

I got out to Flintstone at 11 AM and met Dave in his driveway. I’d intended on bringing him coffee for the morning but missed my chance to pull off into a town big enough to feature a coffee shop—Flintstone has one general store and no traffic lights—so I was empty handed when I masked up and walked out to greet him. He was busy getting his garage straightened up and told me I had free rein on the Scout and to holler if I needed anything. 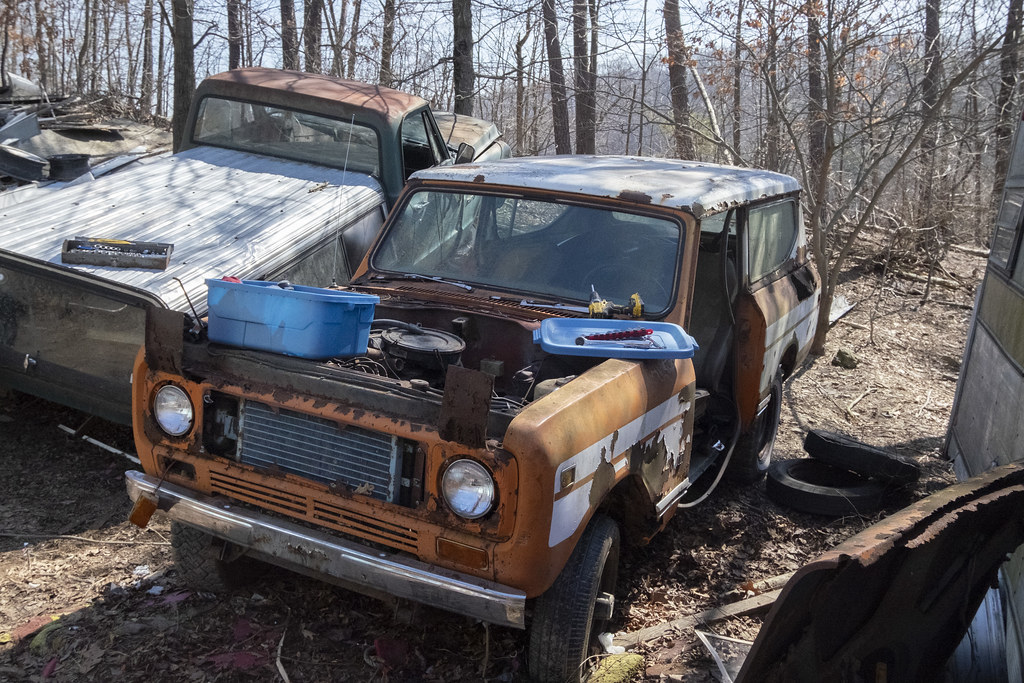 I backed the CR-V up the hill and organized my tools for the jobs at hand. Then I busied myself with hosing all of the problematic parts with PBlaster and waiting for that to do its magic. While that was working I started with the low-hanging fruit: light buckets, emblems, any moulding I could get off (not much), simple dash parts, and other small items. The whole hood was already off the truck so that got set aside and I had full access to the engine bay, where two of my main targets lay: the steering column and the power steering box. This Scout was a 4-cylinder so there was plenty of room to work: it’s essentially a V-8 with the driver’s side cylinder bank chopped off, so there’s a huge empty space over the steering column. After some basic wrangling I got one of the two bolts on the rag joint off, but the other refused to budge; taking a break, I went inside the cab and disassembled the dash so I could get the plastic surround off the column and remove the mounting bolts underneath. 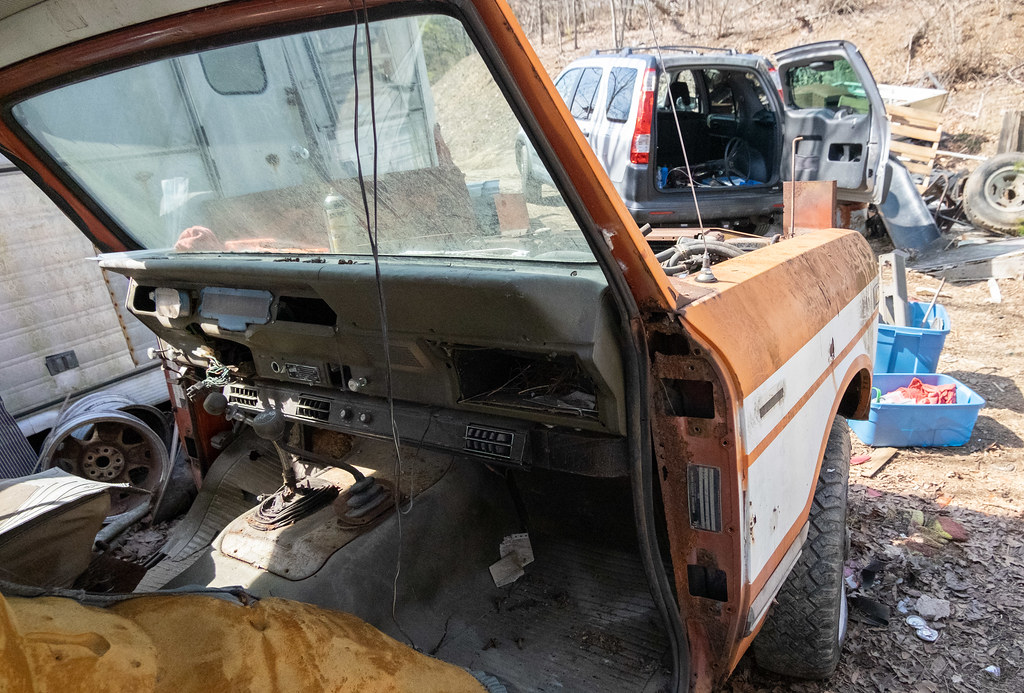 Waiting for more penetrant to work, I went to the tailgate and picked that clean: I got the entire latch mechanism, both latch arms, the button, and the license plate mount (a hinged model, something desirable). 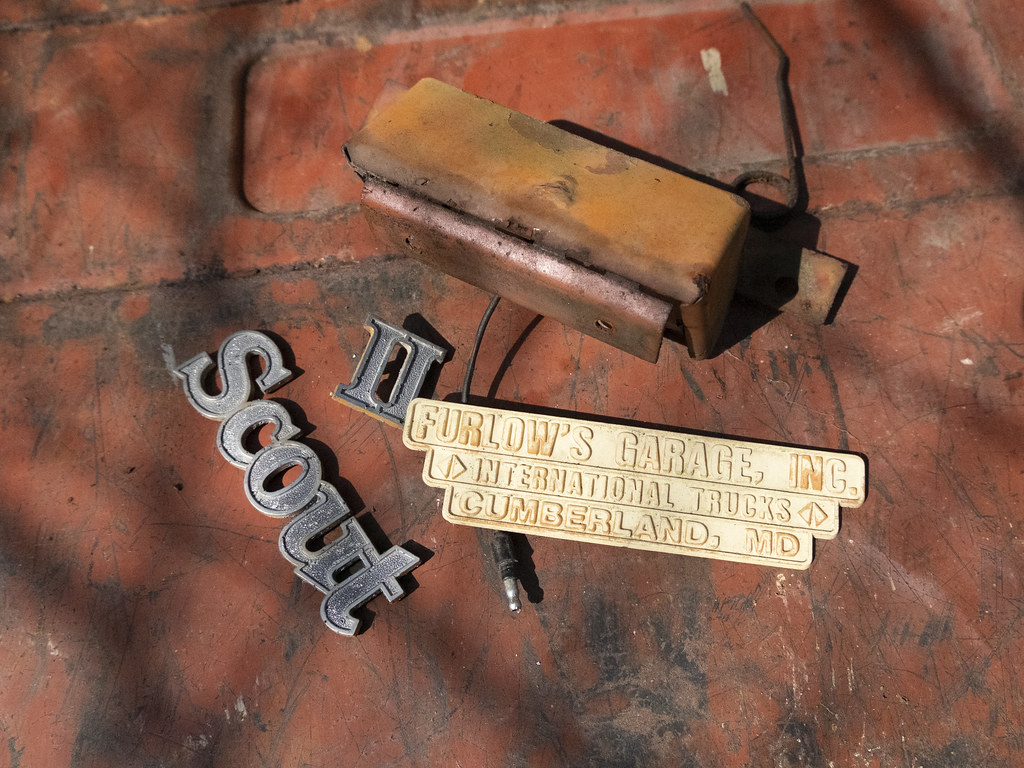 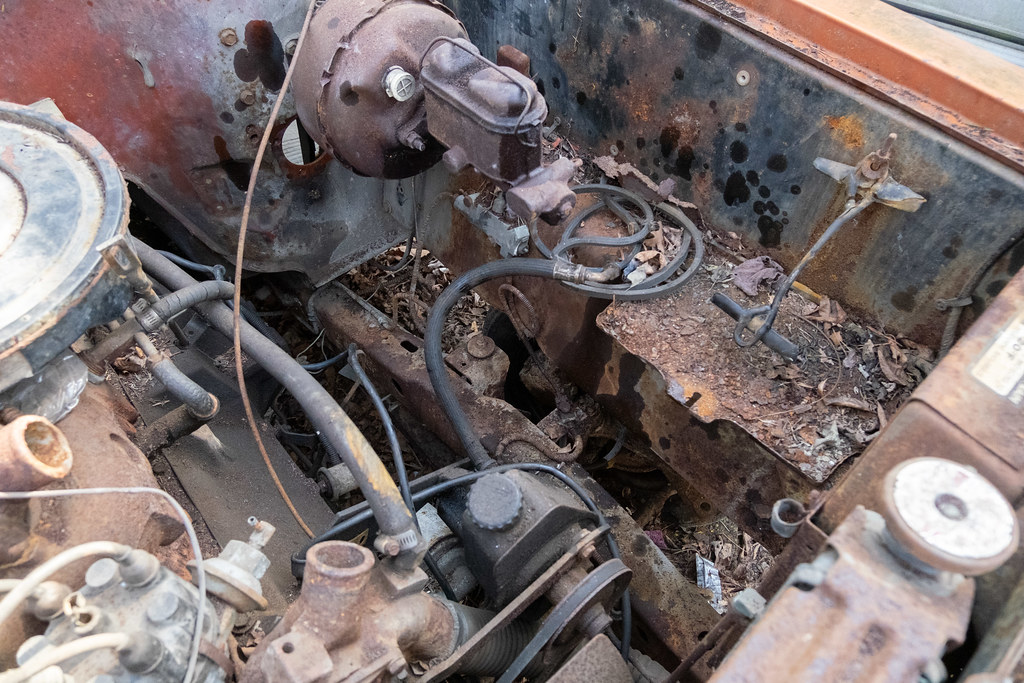 While I was working one of Dave’s friends wandered up the hill and struck up a conversation: a nice man named Paul told me through a thick accent that he was a farrier and had worked on horses from Syracuse down to Virginia and everywhere in between. Fascinated, I listened to him tell stories of helping fix horses as I pulled the dashboard apart.

By 4:30 I was winding down. The heater box was rusted through along the bottom and I had no way of getting the rest of it off without taking a sawzall to the outer fender (which I didn’t have) so I left that. Packing up my gear, I drove back down the hill and made a deal with Dave for the parts I’d gotten. Then I asked if he was scrapping the old Scout 80 carcass I’d parked next to up the hill, and if I could pull the E-brake assembly off for Brian, whose pretty Scout 800 did not come with one. Some short work with the impact driver and some wrenches and it was in my hands. Walking back down the hill I spied a beat-up early 80 tailgateâ€”the one with the embossed IH logo, not the Scout scriptâ€”and made a deal for that too. 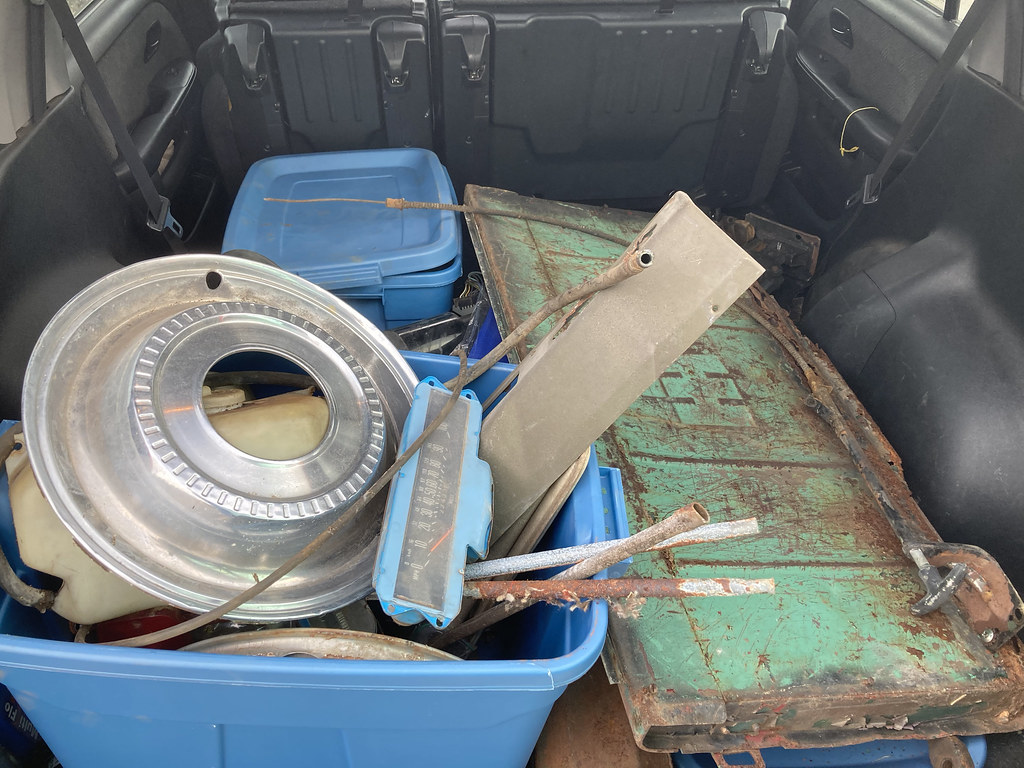 With everything packed away in the CR-V, I hit the road and made it home at dusk for dinner with the girls. As I sped back down I-70, stinking of PBblaster, power steering fluid, and fresh dirt, I realized I had no pain in my shoulder, arm, or neck, and that I was recharged by being outside in the sunshine, working on my own time, doing something I love.