I’ve had new spark plugs in the truck for a week and it hasn’t run this shitty in the 10+ years I’ve owned it. Startup is OK but the engine runs rough and slow, the idle is choppy, and throttle response is abysmal—to the point where I’m afraid the engine will die before the acceleration picks up. Finn and I drove about 25 miles to and from the pick-your-own farm out in Woodbine yesterday, and while it did OK at cruising speed I wasn’t impressed with anything else.

Autolite 303’s are NOT recommended in an International 345 V-8; don’t believe what the parts monkeys tell you. I have eight new Autolite 85 iridiums sitting here on my desk waiting for the weekend, and the 303s will be coming out as soon as possible. NOTE: Amazon and RockAuto don’t offer 85’s in their list of recommendations, but I’ve run 85’s in Peer Pressure for 10 years.

I also swapped out the two courtesy lights at the corners of the dashboard, which were standard filament bulbs, with new LED lights I found on Amazon. It was hard to find replacements for these odd-sized 293 bulbs without the right search terms, but Amazon offers a Sylvania filament-based 10-pack. The passenger side wasn’t working so I pulled the bulb out and cleaned the contact before putting in the LEDs. The LEDs aren’t made as well as I’d like for the money—being bayonet-style they go into the socket and turn to click into place, and what I found was that the metal sleeve holding the two contact prongs was moving independently of the light itself. They are bright and throw lots of light into the cabin, though, and I like that.

I spent a rainy Saturday futzing in the basement, and came upon the three horns I’d bought for the Scout sitting on the workbench, waiting for me to finish the mounting bracket. When last I looked at it, I’d cut down a piece of metal and bent it, but that was as far as I got. I cut the long edge down, ground down the sharp points, added two mounting holes in with the drill press, and painted it with some Rustoleum. While that was drying I pulled the headlight back out and soldered two connectors on to the wiring harness on the single Sprinter horn, then covered the wires with heatshrink tubing. When that was finished, the whole thing mounted up pretty quickly, and I grounded one of the leads to the headlight bucket. Now the horn sounds like an angry European delivery van—but it’s much, much louder. Definitely an improvement.

On Sunday I had some free time with Finley so I figured I’d show her how to change spark plugs. I’ve got a set of Autolite 303’s that I got with some other parts from Brian H. and figured I’d use them as a teaching tool. We started on the driver’s side and worked from front to back. I changed them back in August of 2012 and there was a wide range of wear on the electrodes, from carbon to sludge, so I was a little nervous to see how these looked when we pulled them out. The first couple came out looking clean with just a little tan carbon present, and as we went around they all matched up almost exactly—which means she’s running perhaps slightly hot.

I walked Finn through the basic way an engine works, the importance of firing order, showed her how to pull each plug out individually, hand-tighten the plug before laying on the socket wrench, and hook the wires back up.

The engine fired right back up but she runs a lot rougher now—I seem to remember reading on the old IHC Digest that 303’s aren’t recommended, as well as Champion RJ11Y/RJ12Y/RJ12YC’s, which are always the first to pop up on all of the auto parts websites. Strangely, when I put in Autolite 85’s I get big angry warnings saying THIS DOES NOT FIT YOUR 1976 INTERNATIONAL HARVESTER SCOUT but I ordered eight from Amazon and I’ll replace the 303’s next weekend.

The other thing I’m cogitating on is fabricating a mount for my bottle jack, which is a lot easier to use in a pinch than the Hi-Lift. Chewbacca had a mount on the inside passenger fender half, and even though it’s been twelve years I remember it looking factory-installed. There are no holes in my sheet metal that lend themselves to a mount. There’s no indication anything ever lived there, actually. There’s one threaded hole on the front wall that will be the jumping-off point for what I make—it’s the fender bolt directly to the left of the jack in the picture above. Cardboard bending and cutting will commence shortly.

It’s been two weeks now since I put the starter in the Scout and I’ve had it out multiple times on short trips around the area. Not once have I heard the terrible grinding noise from the starter, which leads me to believe the problem is solved. It’s nice to make upgrades that work.

I ordered a cheap military-style toolbag from Amazon last week that should fit snugly inside the front of the Tuffy console, which will hold an assortment of spare parts and tools. I’ve got a collection of stuff already organized, and a list of other stuff to buy and have on hand for breakdowns:

I need to pick up a few more things:

Outside of this kit, I’ll also have oil, brake fluid, power steering fluid, and coolant in back, somewhere…

This is somewhat sobering. That’s about 10 years worth of yuck in there. 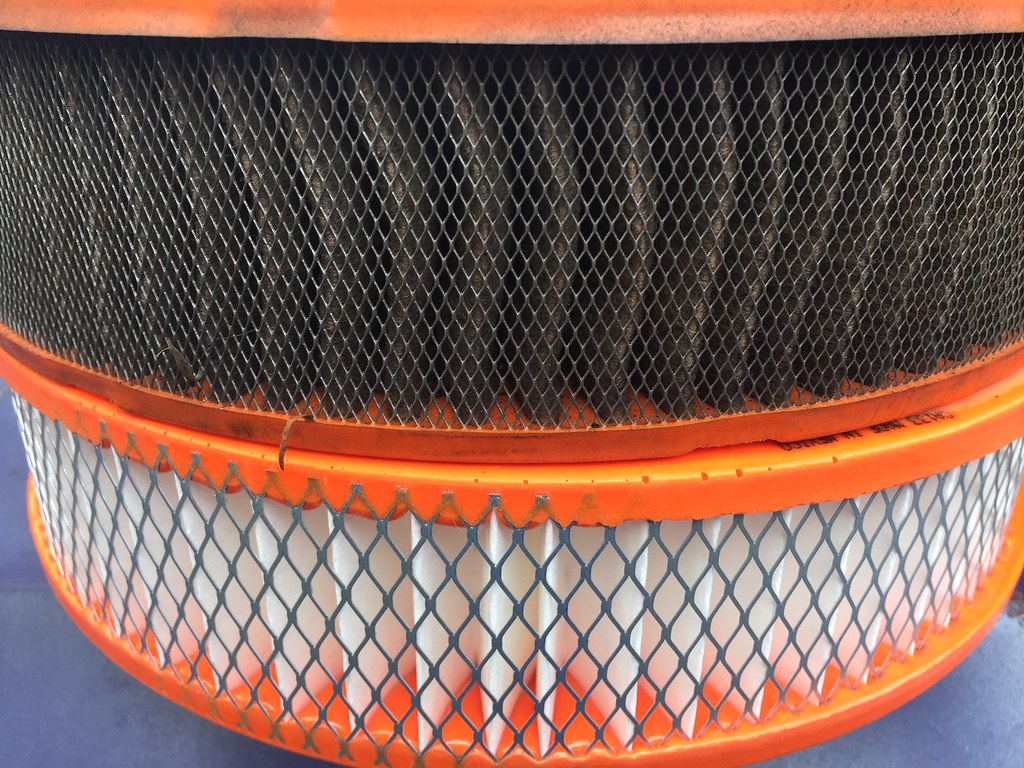 I didn’t get much done on anything over the weekend, but I did get about a half an hour to take care of two things I was looking forward to: installing my new hood strut and re-attaching the rearview mirror to the windshield.

The strut took a little bit of understanding to complete, as the directions were basic text and included only two pictures, but I was able to understand the basic concept and get things aligned pretty quickly. The original spring-loaded pin gets removed. The new bracket goes in over the existing fender bolts. Then there’s a two-bolt bracket that installs in the original pin rail on the hood, and a plastic standoff that attaches to the top of the gas piston. Once I’d sorted that out I adjusted the length of the piston and then tightened everything down. It’s a world of difference and it means I can close the hood from the driver’s side instead of walking around each time.

The rearview mirror went in quickly, and this time I glued the clip on right-side up (last time I did it upside-down). Hopefully the Permatex kit will hold better than the 3M kit did.

Finally, I took a look at the heater valve in the engine bay while I had the hood open. It’s been stuck open forever, which means even when the fan is off it’s blowing hot engine air into the passenger compartment. I was going to soak it with PBBlaster again in the hopes that I could get it to move, but first I tried closing it with my hand—and it moved! Interestingly, the slide control on the dash is impossible to move, so I guess there’s something frozen or stuck closer to the dashboard. Either way, it’s closed for now.

Mike C. sent me a link to this Scout II Dana 44 Rear Disc Brake Conversion Kit, which is several hundred dollars less than I’ve seen in other places. This is on the list of things I’d like to do to Peer Pressure when money isn’t so tight.

Update: looks like the original vendor is gone. I’d go with a couple of the Light Line vendors instead–both of whom have been active in the IH community for years:

D&C even has an instructional video, which is excellent.

Here’s a fantastic rundown of information about rebuilding Thermoquad caruretors from the Binder Planet, with part numbers. The important stuff:

1. Rebuild Kit. I use a GP Sorensen part number 96-246C kit, costs approx. $37.
2. Floats. I use two GP Sorensen part number 779-1726. These are nitrophyl floats. I have found that the brass floats sold for the T-Q will fit the fuel bowl, but are not the correct shape to work properly and could not be adjusted to work properly. The Nitrophyl floats work quite well. Good ones weigh 7.5 to 8.0 grams.

Here’s a great thread on the Binder Planet about D44 Rear Disc Brake installation where the bracket was welded onto the axle flange. Further down in the thread there’s a parts list for a bolt-on solution, which is more my speed, but the combined price list is about $700.

This looks like it could be a good upgrade: WHITE 4 point 194 style LED replacement bulb – Whitegauges.net. At $5 a pop, it’s an expensive proposition, but knowing how difficult it is to get into the dash, I’d rather only do this once. Especially if the light they throw is brighter than incandescent bulbs.

Update- from the comments below, I pulled this link, which is for ten bulbs. Hmmm…

The belts and plate holder are ordered!