On our way down Congress Street in Austin last week, I was looking up at the beautiful neon signage when Finley said, “Look, there’s a Scout.” She was right: a red Scout II sat out on the street with the words Hotel San Jose on the side; apprently it’s pretty famous there but hasn’t moved much lately by the looks of the dried leaves on the front seats. I posted a picture on Instagram and one of the local Scout owners I follow liked it and asked if I was in town on Monday; she was going to be at a car meetup and would put the word out to the other Scout friends in town.

Sheepishly, I parked our rental Buick around back; lined up in front of the bar were a ’65 Chevy pickup, a ’70 Ford pickup, Lydia’s beautiful Scout II, an absolutely evil-looking early 70’s Nova, a ’56 or ’57 Belair sedan, and a mid 60’s Ranchero. After I grabbed a beer, I got to talking with Lydia and she told me about how she found her Scout; presently a couple of Scout 800’s rolled in, followed by a third she’d never seen before, and then a huge lifted Traveler. I met a bunch of new folks—atxscout800, seatruckn, and a couple of other folks not on the ‘Gram. 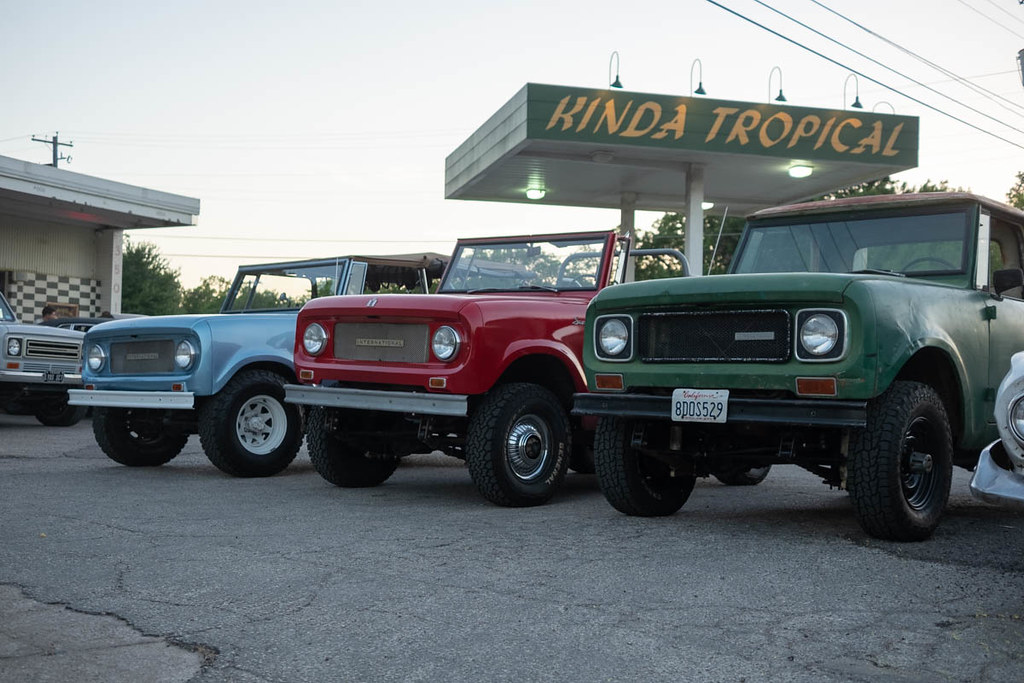 We talked trucks and Austin and music and other stuff and generally had a great time. At one point I looked around and a blown El Camino had arrived, several customized vans, a first-gen Mustang, an absolutely spotless ’68 Pontiac Tempest, a beautiful ’60 Chevy Sport Coupe, and other beautiful cars. I hung around until about 10, when the crowd started thinning, and left with a sweet ATXScouts T-shirt, a couple of stickers, and a big wide grin on my face. Thanks, Austin!