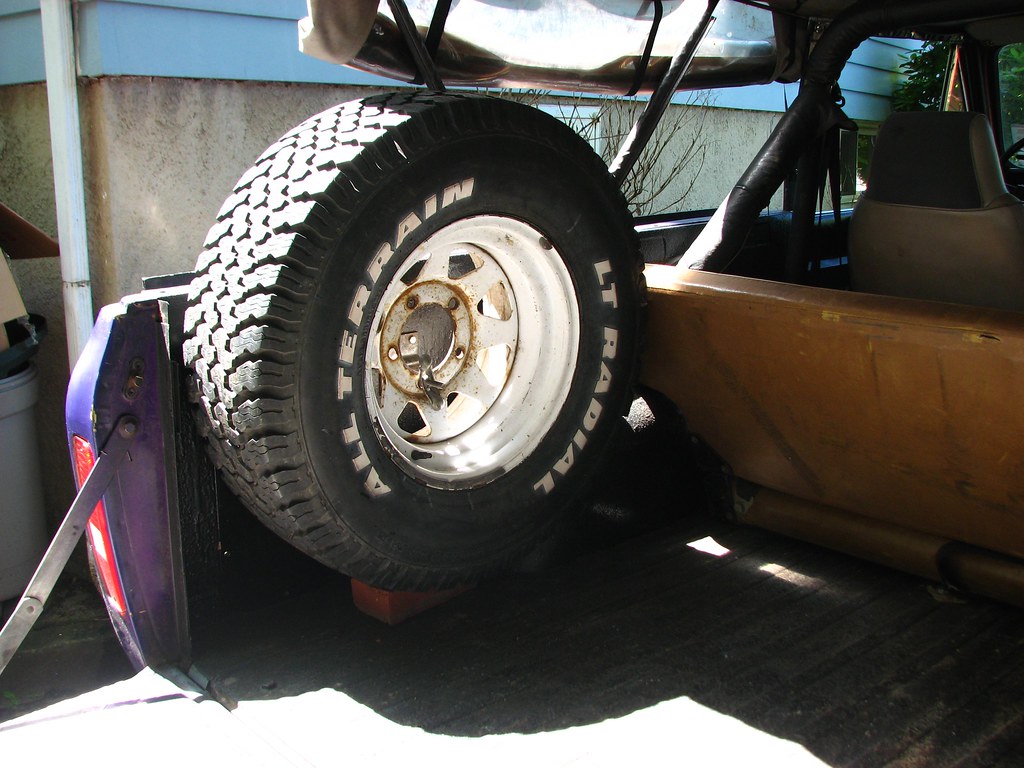 So I put the spare up on a brick, remounted the J-hook and called it done. I have to get some larger stainless bolts for the license plate and run the wire back up into the tailgate. I stopped on the way home from work (the weatherguessers lied and claimed it would be in the low 60’s) and pulled my spare tire off. It’s changed the handling characteristics of the truck to the point where hitting expansion joints or non-parallel bumps in the road sends the whole truck into a sketchy front-to-back oscillation that I don’t like. I can see the tire vibrating back there and feel it in the handling; for a truck on springs this stiff, it’s not a good feeling. I’ve also noticed a lot more body creaking with the tire mounted out back, and the passenger door is getting harder to close securely.

I’m going to drive it a few more times with the tire off and we’ll see how it feels. I bought six stainless bolts for mounting clips to hide the license plate wire, which I hope to put in sometime in the next day or so. Before I mounted it I drilled and tapped four holes on the backside of the main bumper, and there’s enough standoff to make installation easy. The mirror mount got painted and reinstalled.

I also put the soft top bows back together as much as possible, but I need some 1.5″ stainless bolts to connect wider sections of the bracketry (I’m using nylon lockwashers this time, so I need a longer bolt to snug the threads). Now that it’s getting cooler I’m going to pull the bikini top, wash it, and store it for the winter. My hunt for stronger snaps is still underway; I’d like to get the door surrounds fixed before it really gets cold. Last night I sanded the main bumper down and shot everything with a coat of black semi-gloss. Last night’s progress: cleaned with Acetone, primered, and bondo’d. While I had everything out, I filled in the holes on the driver’s door, scuff-sanded the softtop hardware, and got as much ready for paint as possible. After Finn went to bed, I used the evening to wire wheel the rest of the bumper. This section went a little faster because I wasn’t dealing with as many compound curves, but there were still a few areas I couldn’t reach with the angle grinder. After taking off the rest of the high spots, cleaning it all up with the flap sander and wire wheeling flat areas, I covered all of the welds, angles, and unsanded sections with a liberal coat of POR-15 and let it sit overnight. Tonight it’ll get a rubdown with some acetone and then a coat of etching primer; while that’s drying I’m going to mix some Bondo together to fill in pinholes and other imperfections. While I had the POR-15 open I put a coat on worn sections of the soft top bows and hardware. Tonight I’ll scuff it with some sandpaper and get it ready for a coat of paint as well.

With Finn’s help, I was able to pull the new bumper off and replace it with the original on Saturday. I also mixed up a little bondo and filled some of the larger holes and valleys on the swingarm, as well as the exploratory divot I made in the bondo skim on the driver’s door.

The mirror came in on Friday, and it looks great; I shot the mounting bracket with primer and let it sit to dry. I need a #107/5mm steel bit to drill mounting holes, and then I can tap them for the included screws. While I was out there I also took the soft top bows apart; they’re looking rusty and beat up. The lever bracket is the worst, so I hit it with the flap sander. All of the mounting bolts are stripped, rusty, and worn, so I picked up stainless steel replacements at the store. When I wire wheel the bumper I’ll hit the ends of the bows themselves and then POR-15 everything that’s bare metal; then I’ll shoot it all with the same semi-gloss black I’m using for the bumper. Thinking about Jen driving the Scout got me to thinking; the RPM band is a lot lower in Peer Pressure than it is in our Honda, and it would be great to have some indication for shifting (instead of by feel). Tiny-Tach makes a tachometer that installs simply by wrapping a wire lead around one of the spark plugs and grounding the other; it’s a little ugly but the price is good. Plus, there isn’t as much guesswork with installation as with a mechanical tach.

Bumper Progress, and a Tune-Up

Mama gave me a much-appreciated mental health day today, so I went out and got a bunch of stuff done on the Scout. My main goal was to get the bumper sanded and prepped for paint. It’s been a few months since I mounted it, and the bare metal has been indoors for all but two rainshowers. I took the swingarm off and attacked it with a wire wheel and flap sander: Then, after I’d got into every crevice and crack I could reach with the angle grinder, I hit all the welds, oblique angles, and areas I couldn’t reach with POR-15. While I had the brush in hand, I coated the frame reinforcements and a bunch of other small areas that needed attention, as well as the shoulder belt mounts that were welded in to the rollbar.

After that had set and tacked for a few hours, I hit the whole thing with etching primer: Then, because I had the time, I did a bunch of small projects that were on the list, including a set of new wires and plugs (something I’ve been meaning to do since I bought the truck). This is what I ended up with: They’re Champions. I replaced them with Autolite 85s. I’ll be curious to pull a few next spring and see how they look compared to these. The wire set I used was Belden/Federal Mogul 700259, and it was perfect.

I drilled four holes for the front legs of the rollbar and put in new grade 8 bolts. Luckily, with all of the hardware I’ve been purchasing over the last year, I had exactly the bolts, washers, and nuts I needed without going out to the store.

Finally, I did some exploratory surgery on the driver’s door to see how/if I could mount the OEM mirror I have sitting on the shelf. The measurements I took for Mike don’t line up with what I’ve got at all; the plate welded to the inside of my doorskin is shorter than the one on my spare in the garage, and mounted rearward by about 4″. So I’ve got two options: a new set of Ranger mirrors like Mr. Scout has, or drilling and tapping a new hole in the plate and one in the door for the mirror I’ve got. Either way, I’m going to have to skim some Bondo over the holes from the old one.

Update: Peer Pressure was running choppily and the exhaust stank of oil after the tune-up, so i figured I hadn’t seated one of the plug wires properly. After work today (I drove her in three days this week) I popped the hood in the garage, grabbed my Leatherman, and reseated all eight wires. This time I pulled the rubber covers back, made sure I saw the connectors click onto the head of each plug, and pushed the cover back down. Voila. She started right up, idled smoothly, and runs better than she did before. Problem solved.