This interesting specimen showed up recently in my usual Scout sales feed, and I almost spit out my coffee when I read it. This “Inernational” is a work of art. It looks like the rockers on either side are held together with Elmer’s glue and Ritz crackers; the interior looks like a bear was trapped inside and ate the cushions for breakfast. Naturally, the owner spent money on the most important elements and put a stupid-looking set of wheels on it. I’ve heard of a lot of carbs in my day but a Daytona is not one of them, and not for an IH engine.

He’s right, you will definitely be the only one around with anything close to this.

I’ve been considering a switch to my Instagram account to split out the Scout into its own account for a while now. Looking at the Top 9 results from this year, I think my mind is made up.

Looking through my fuel/mileage notebook, and doing some revised math, I put a total of 3177 miles on the Scout this year. Now that I’ve fine-tuned the ratio calculation, I’ve updated the averages table from earlier this year to truly reflect the miles driven:

It certainly does feel like I’ve put more miles on her this year; from another Ohio trip to a visit out to the Scout Guru’s garage in Rehobeth to parts hunting in Western Maryland to multiple trips out to Chestertown, I’d say she’s gotten a hell of a workout.

I ran across an auction for a Scout in Gold Poly the other day, and grabbed the photos while they were online. This is exactly what my tub looked like from the factory complete with a true ’75 grille:

Minus the west coast mirrors and black aftermarket wheels, of course. This rig even has the chrome trim strips, which mine was drilled for (Chewbacca did not have this exotic decoration). This one also has a factory step bumper, which Peer Pressure did not.

As much as I despise the purple, I think I like it better than Gold Poly. And I’m much happier with a ’72-73 grille than the odd ’75 grille design.

I also saw this gold ’75 at Nationals this year, parked several rigs down the line from me: 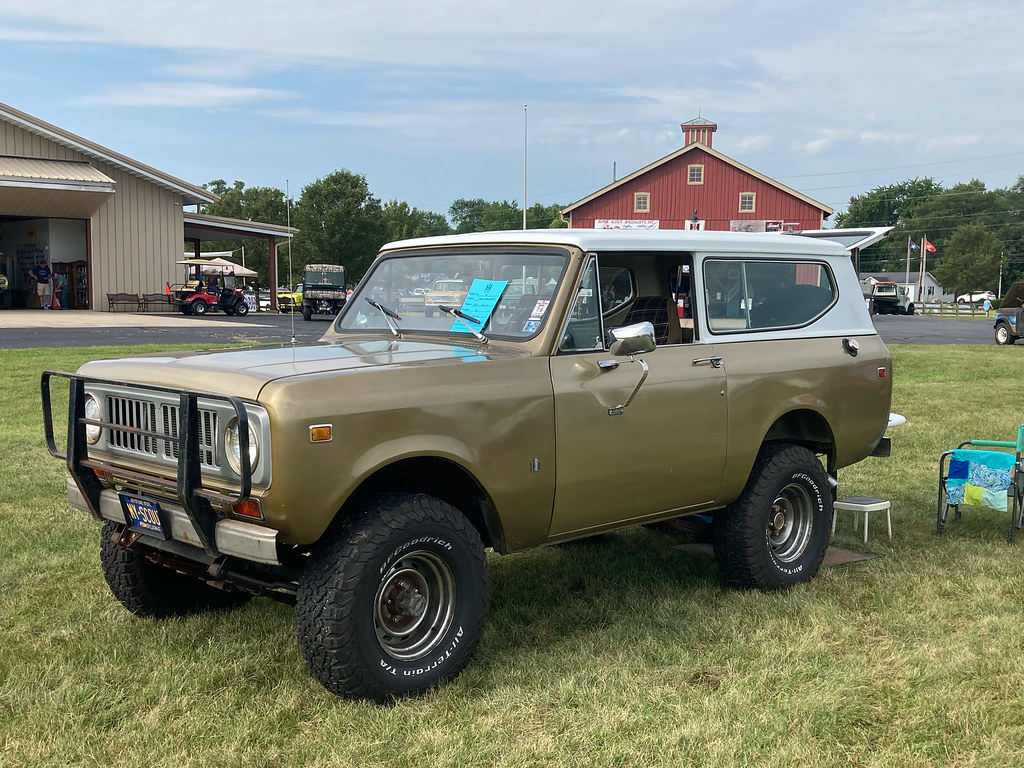 Gold with a white top and Rallye wheels—I like that look a lot more. And interestingly the grille surround is silver as well, something they did on the ’71-’72’s from the factory.

On my way out of D.C. yesterday I fell in behind this engineering masterpiece, and many questions were asked:

I mean, it’s drivable, as it made it up to the District from South Carolina, but damn.

Back On the Road

I walked out to the garage on Saturday fully expecting to fire up the Scout and go for some supplies, and…the starter barely cranked over. All the air drained out of me like a leaky pool float. Annoyed, I put the trickle charger on the battery with the cables to the truck disconnected, and took care of some housework. An hour later, it still wouldn’t crank, so I put them back on and waited two hoursâ€”with the same result. I thought I’d try swapping the old starter out for the new one in the off chance that was the issue, so I put the tow strap on the CR-V and pulled the Scout out of the garage so that I could take the tire off and have level ground to work on. I’m getting pretty fast at swapping starters out, and I’ve now added a 9mm wrench for the ignition lead to my toolkit.

That, of course, did not change anything, so I put the smaller Honda battery in the Scout and found that it fired right up.

At this point, I’ve got two possible culprits:

Because time was of the essence, I figured I’d solve for #2 and bought another new battery, which was not a cheap solutionâ€”but I didn’t have time to chase down wiring issues with other projects waiting. Once I put the new battery in, she fired right up. I let her sit overnight and she started easily on Sunday morning, so I put about 20 miles on her running errands.

On my way, I spied a new Scout sitting at the shop up the street, so I drove up to the back lot and peeked around. He’s moved the stuff that was there and pulled in some new trucks: the thing that caught my eye at once was a beautiful, beat up Metro that I think I’ve seen online in classifieds.

There was a red Scout that looked good from one side and kind of terrible from anotherâ€”minus axles, engine, and front clip, and covered in interesting speed parts stickers. The inner fenders were in really nice shape but the more I looked the sketchier it got.

Near that was a 1980 in rust-colored primer, which looked like it was in very good shape from the outside. Peeking inside showed it was a manual with bucket seats, but I didn’t see any diesel badges.

Conscious that I was trespassing, I was careful to stay away from them as much as possible, shoot some quick pictures, and then leave quietly. I figure driving a Scout up to see other Scouts means I’m not just some rando, but I don’t want to piss anyone off, and it’s not hard to find the guy in the purple Scout around here.Â The rest of the trip went without a hitch, and I was able to slide 4 sheets of 4’x8′ beadboard in the back, using several bits of scrap wood to make sure nothing got scratched or dented.

The plan now is to let her sit in the garage until Thursday with the new battery connected, and if she starts without a problem I’ll call this fixed. If she doesn’t, then I’ve got to pull her back out and chase down a parasitic drain, the concept of which does not fill me with joy.

I stopped in to the Harbor Freight and picked up the cheapest auto-darkening helmet they had along with some small welding magnets, but the guy at our local Home Depot rental counter looked confused when I told him they offered welders on the website, and assured me they didn’t have any. So I’ll have to take a day off, go to our rental outlet, which isn’t open on weekends, and get one there. 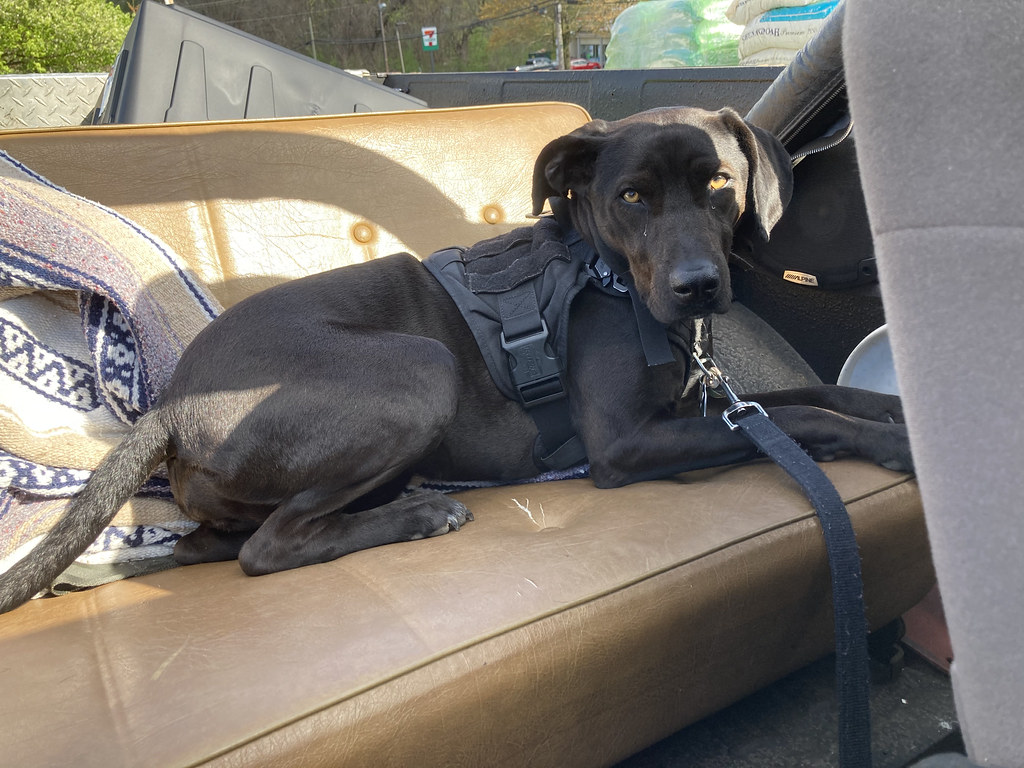 Sunday was supposed to be wet all day but shaped up to be sunny and warm, so I took advantage of it and pulled the roof off the truck. This year I’m modifying the setup in the garage a little to move the top backwards so that I can pull the truck in a little further, but I need another set of ratchet straps and a 2×3″ to finish it up. We then took a ride to the Home Depot with the top off and the entire family enjoyed the sunshine. I didn’t have time to pull out any of the soft top hardware and install it, so next weekend I have to decide which color I want this spring: black, nutmeg, or tan? 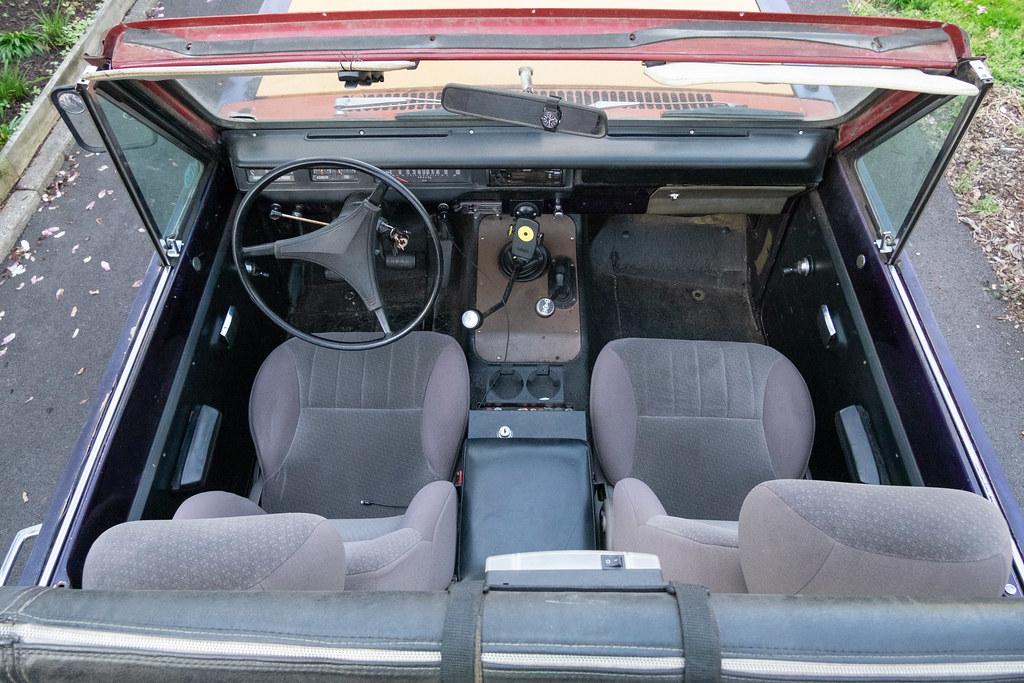 Otherwise, she’s running smoothly. There’s an intermittent squeal from the power steering belt that alarms me, so I’ll put some belt dressing on that to see if it helps at all. The manifold bolt I replaced makes a huge difference in the engine note; everything is much quieter now. She is being a little finicky on hot startsâ€”it takes some cranking to get her to catch, which tells me there’s something in the carb that needs adjusting.

I saw this in the usual crop of sale listings and laughed my head off. This is like a time capsule of late ’80’s early ’90’s influences.

Jawbreaker was/is a seminal punk band from the Grunge days; Rock Shox made the first front suspension forks for mountain bikes in the early ’90’s (I have one on my 1994 Cannondale). Cycle News was a motorcycle magazine, back when they used to publish those. That Just Say No sticker is late 80’s. B&M, Wiseco, Bell, and Crane stickers are on every toolbox from here to Alaska.

A few weeks ago, during a weekly Craigslist/Marketplace survey, I spied a chewed up a dogdish International hubcap in the foreground of a photo. I reached out to the seller to see what the rest of them looked like. He sent me back some pictures, which revealed the condition I was expecting: well-used but still mostly intact.

This design normally comes in two pairs—two solid and two with a hole in the center, but someone widened the donut pair roughly to fit over locking hubs. Those are pretty much garbage. The solid ones are dented but might shine up nice, and for the price I offered they were a bargain; I paid more in shipping than I did for the whole set. I washed them in the work sink and used a rubber-covered wrench to pop most of the large dents out of the two solid ones. I bought them to display, but I can always pick up some inexpensive clock kits and make something useful out of them too.

I have a little notebook in the console of the Scout where I record the mileage every time I put gas in the tank. I started doing this back in 2014 when I wanted to figure out the MPG, and it’s been super valuable to sort out all kinds of other things beyond quantifying how thirsty Peer Pressure is. I took her out today for a quick run to the grocery store before the snow flies this coming week. When I came back inside I brought the book in and plugged the numbers into an Excel spreadsheet. The graph it produced was a little surprising.

The dip during 2017 makes sense, as I was out of commission from September of that year until about March of 2018 with chemo, surgery, and recovery. I took her 275 miles to the Eastern Shore and back for a camping trip in 2018. Later that year  we drove out to Nationals, which accounted for roughly 1,000 miles, and in 2019 we went back. In 2020 I was home every day and thus drove the Scout everywhere. I think I put about 20 miles on the Honda last year. I wonder why I only drove the truck 243 miles in 2016?

I also updated the spreadsheet where I capture costs—for everything like parts, repairs, and incidentals minus gas, and the average cost per year is at $436. I do actually capture gas costs in the mileage book, and maybe if I’m motivated this week I’ll go back out, get the book, and plug that into the spreadsheet.

Meanwhile, there’s a local guy with two trucks on Craigslist, one whole package and one for parts. I inquired about the fender flares on the parts truck but he said he was keeping those. I told him I’d be interested in coming out to see what’s left after the snow melts—I’m still interested in a spare set of locking hubs to put on the shelf, as well as a heater core I can refurbish on the workbench while the snow flies outside.