2022 didn’t go quite as we planned, but I got a remarkable number of things on the list accomplished. The replacement windshield is installed and makes a world of difference. the turn signal is fixed. The spare heater core is finished. And the heater valve is working! With that in mind, here’s the list of goals for 2023, in order of importance and realistic accomplishment:

I took the Scout out for a quick errand yesterday with Hazel to go pick up some dinner, and a small voice in the back of my head reminded me that I needed to get some gas. I’d already been to the other side of town to hit the dump earlier in the day, but our trip wasn’t that far and from what my mileage booklet said, I’d only gone thirty miles or so since my last visit to the pump.

I drove down the big hill from home into Ellicott City and just as I hit the bottom part of the road along the river, the truck died and I coasted to a stop on the shoulder. Hazel looked over at me from the passenger seat with reproach, then curled up on the seat and sighed. This is the second time this has happened at the foot of the hill—the first time it died pulling into the gas station a little further up the road—but it’s a warning I’m going to heed. I’m terrified of losing power going down that hill, and even though I know I could use the clutch to engine brake until a stop, when the steering goes out it’s like piloting an oil tanker. I’m terrified of digging in to the wiring behind the dashboard for fear the truck will never start again but the gauge situation and the wiper issue are now forcing my hand.

In the meantime I’m going to revise my mileage tracker to give me a better estimate of what my MPG actually is; my records show that I went down to empty in October of last year, which means I can use that and the records up until now to give me a better understanding of what my range is. Doing the math between now and then, I put 2887 miles on the truck, which converts to 3280 true miles (the ratio is 88 indicated to 100 true). I’ve put 296 gallons of gas into her between now and then, which works out to 11.08 miles per gallon. Not as good as Chewbacca did—Chewbacca was a 304 with a 2-barrel Holley 2100 carburetor and stock wheels, and she averaged anywhere from 12 to 14 depending on the type of driving and whether the top was down or not. Peer Pressure is a 345 with a 4-barrel Thermoquad on 32’s, and while I don’t spend my time racing from streetlight to streetlight, a 4-barrel is a lot thirstier. Also, all of the stupid emissions bullshit tacked on to my engine surely isn’t helping. To put things into perspective, my Jeep XJ with a 4-liter V6 got about 14mpg on average—keeping in mind the curb weight of the XJ was a full thousand pounds less than either Scout.

I’ve always figured no better than 10MPG as a rule of thumb, using my experience with Chewbacca’s low end and figuring 1-2MPG as a cushion was a good idea, but knowing exactly what my range is will help estimate even better. And there will be some digging around behind the dashboard come springtime: First, to hopefully diagnose and repair the gas gauge, and second to find the issue with the wipers and fix that. 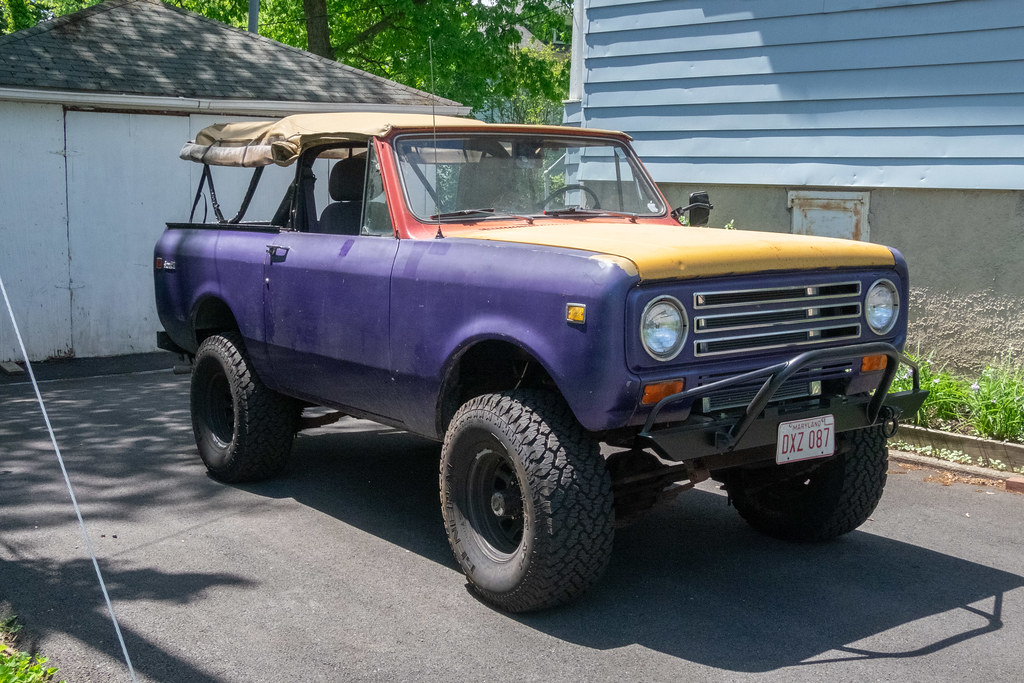 In 2021, I did a lot of things I wasn’t planning on, but needed to get done, like rebuilding the front bearings, replacing the front brakes, installing a cool bumper and then adding fog lights. Okay, maybe the bumper and fog lights didn’t need to happen, but it sure looks better. Reviewing the T0-Do list from 2021, there are some big things I thought I might be able to accomplish and some that were blue-sky goals; there will be some things that carry over to next year. And I’ve got some new goals for 2022, in order of importance and realistic accomplishment:

It’s time for the annual List Of Things I Really Hope I Can Get To for the year of 2021. Looking back on last year’s list, I was able to get a bunch of things doneâ€”and do some others that weren’t even on the radar. The engine got degreasedâ€”I wound up buying a pressure washer, which made things much easier. I swapped in a new starter, fixed the speaker cable, and sandblasted a bunch of spare sheet metal to get the rust neutralized. Beyond that, we started work on lockable storage, I fixed both front shocks, and replaced all of the bulbs in the dash with what turned out to be bluish LEDs. So what’s in the future for 2021? Let’s review:

As with 2018, I did get a lot of my 2019 list taken care of. The radiator and caster shims were a big improvement, and having the rear U-joint fixed was expensive but necessary. Little things like the hood strut and the front speaker were great quality-of-life improvements that I was happy to have. But this is a 40-year-old truck, and issues need to be addressed:

Wow, I actually knocked a lot of stuff off the 2018 to-do list. Tires, Hagerty insurance, and Hydroboost are all some big accomplishments compared to years past. I’m feeling pretty good about everything, and Peer Pressure is running strong. Still, there’s more that can be done:

So, with major travel and vacation in the rear-view mirror, the next things on the to-do list are:

…Nothing, really, has happened. Peer Pressure is running well, if a little rich, but she started right up all winter long and after a little bit of lifter tick the engine warms up and smooths out really quickly. I actually drove her a lot more this winter than most because we didn’t have as much snow, which meant less salt on the roads.

So let’s update the To Do list for 2017, in order of high-to-low probability:

Adjust the Tuffy console forward 2″. It still gets in the way of folding and tumbling the rear seat. I tried moving it forward last year but what I’m probably going to have to do is drill three new holes in the bottom of the console to get it in the right spot.

Adjusting the doors again. The striker on the passenger door doesn’t latch unless you slam that fucker shut.

Replace the windshield. It’s as difficult to see out the front of the truck as it was before. Thing is, I have no idea what shape the frame on the truck is in; I could take the current glass out and find the metal is completely shot. However, I’ve got two other frames in the garage that could be rustproofed, fixed, and painted. So the first step would be to pick one and rehab it.

Install the goddamn Hydroboost. Again, carried over from last year. I’m going to bribe Bennett with some beer and pizza and have him help me with this over the summer.

A new radiator? I thought this might be easy and relatively cheap but it’s not.
Option 1: a Champion Radiator, plus shroud and electric fans: $466. Ouch.
Option 2: an RnD radiator for $375. I have to check and see if my existing shrouds will fit.

Buy new road tires. Again, this is expensive. The trick is to find a narrow set of 32s so that it doesn’t look like I put toy wheels on. Seems like most 32s come 11.5″ or wider. Cooper Discoverers are very road-looking, while BFG T/A KO2s are more aggressive. I can actually get these from Amazon in 10.5″, but I don’t have $750 for that laying around yet. [BP search link]

As with last year, I’ve got a list of stuff I’d like to get accomplished this year. Last year’s list was pretty successful, in that I got most of it done or at least attempted, and it was handy to refer back to. So, this year’s list, in order of things that will most likely get done to the longshots:

Adjust the Tuffy console forward 2″. It gets in the way of folding and tumbling the rear seat. But that’s it. It’s just an annoying 2-person job.

Rebuild spare carb. It’s been sitting on my shelf for four years. I’d like to get a kit for it and have it ready and waiting.

Install Hydroboost. Yep, carried over from last year. I’m going to bribe Bennett with some beer and pizza and have him help me with this over the summer.

Replace the windshield. I priced out a new one from Safelite, and they are about $300. The gasket is another $70 from Super Scout Specialists. Update: Turns out I’d forgotten I have good spare glass in the garage. I need to clean some black sealant off the edges, but overall it looks like it’s in good shape. So the plan is to clean the better of the two frames I’ve got, prime and paint it, and swap it out for the one I’ve got.

Buy kick panel sheet metal and doglegs. Just to have on hand. I’ve got a passenger’s front dogleg I hacked out of the brown forest Scout six years ago with a Sawzall; I just need to sand the paint off, drill the spotwelds out and separate it from the body metal.

Buy new road tires. The BFG’s I’ve got are in great shape and have lots of tread left. And they look cool. But they’re louder than a jet engine. I’ve got a set of stock 15″ steelies with dry-rotted tires I could mount a quieter road-going set on, and perhaps sell the M/T’s to someone who might use them. I’d like to keep my black wagon rims though. The trick is to find a narrow set of 32s so that it doesn’t look like I put toy wheels on. Seems like most 32s come 11.5″ or wider. Cooper Discoverers are very road-looking, while BFG T/A KO2s are more aggressive. I can actually get these from Amazon in 10.5“, but I don’t have $750 for that laying around yet. [BP search link]

Rebuild the top end of the spare engine. Far off in the future, but still something I’d like to start preparing for. First up is a decent stand to mount it on.

I’ve always had a lot of projects planned for the Scout. I tend to research a particular improvement, gather the materials together to get the project started, and then wait patiently for the time to get it done. As a result I’ve got a ton of stuff laying around and no idea where to start (or what I’ve got, as some of the stuff has been laying around here for a while). So here’s an unordered, unfinished list to get everything out of my head and into one place: something else to consider is the money I’ve put into these projects without getting anything done. It’s time to make some progress before I buy anything else. So, without further preamble:

So unless some kind of miracle combination of time, money, or opportunity comes along and I inherit a car-sized paint booth, adopt an engine mechanic, or win the lottery, I’m going to try and get these jobs accomplished this year before I tackle anything else. That is, of course, if nothing breaks.